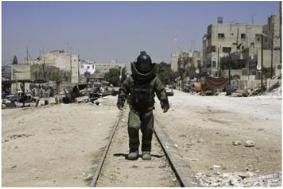 As well as being voted best film, Kathryn Bigelow won the best directing Oscar and there were technical awards for film editing, sound editing and sound mixing – plus an Oscar for best original screenplay.

Despite expanding the best picture category to 10 nominees, in an attempt to allow more populist films to feature at the awards ceremony, The Hurt Locker has made just $15m (£9.9m) at the box office, making it the lowest grossing film ever to win best picture.

Rival blockbuster Avatar has become the biggest-grossing film in history, taking more than $2bn (£1.32bn) at the box office.

It picked up three Oscars, for art direction, cinematography and visual effects.

Read our full review of The Hurt Locker on Blu-ray here.