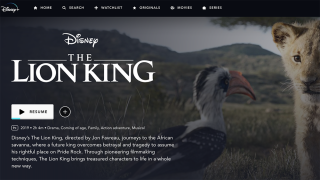 There's a whole new world of Disney content to enjoy over on the excellent Disney Plus streaming service, which launched in the UK and select European markets in March following its debut in the US and Canada last November.

And (shamefully, and because ultimately what else is there to do?) we have been glued to the service ever since it appeared on our telly boxes.

If you are a fellow mouseketeer and subscriber, and don't know where in the Disney, Pixar, Marvel, Star Wars and National Geographic catalogue to start, or perhaps you're simply wondering what is available in 4K, HDR10, Dolby Vision and Dolby Atmos, we have the answer.

We've done the hard work to recommend the best movies and TV shows to watch on Disney Plus, from Star Wars: The Rise of Skywalker to Avengers: Endgame, The Mandalorian to The Simpsons, and of course our pick of the classic Disney movies. So, please, be our guest...

Anyone who queued at a TKTS booth in London's Leicester Square or New York's Time Square, or entered the ticket lottery, or lost several hours trying desperately to book online, will know that since 2015 Hamilton has been the hottest theatre ticket in town. And now the highly anticipated filmed version of the smash-hit musical is, from 3rd July, available exclusively on Disney+.

No queues or profuse sweating necessary; just launch the app on your device and into Lin-Manuel Miranda's American Founding Father musical you go!

What to watch next: Newsies: The Broadway Musical

When the world first got wind that Disney was about to get its own video streaming service back in late 2017, anticipation started to grow over the new live-action Star Wars television series it would house. Now, two years on, we can now watch the whole series!

Set between the fall of the Empire and arrival of the First Order, Jon Favreau's genre-blurring The Mandalorian follows a lone bounty hunter operating in the outer reaches of the galaxy far from the authority of the New Republic.

Expect high-octane action, well-placed humour, and wonderfully imaginative creatures (we love you, Baby Yoda). Season two is due in October 2020, and season three is already in pre-production!

What to watch next: Disney Gallery / Star Wars: The Mandalorian

Anyone observing the Twitter outrage over speculation that The Simpsons may not be part and parcel of Disney Plus UK due to rights restrictions may well have thought the world was about to end.

Thankfully, everyone's favourite animated sitcom is indeed on the service – all 600+ beloved episodes – that's 30 seasons – of it. Season 31 is due to hit Disney Plus in November, too.

What to watch next: The Simpsons Movie

Not for the faint hearted, this nail-biting National Geographic documentary follows rock climber Alex Honnold in his pursuit to be the first person to successfully free solo climb Yosemite National Park's 3000ft-high El Capitan. Honnold's intrepid, superhuman quest deserves a tenacious telling – and it gets it in this gripping, Oscar-winning documentary.

It goes far beyond the enormity of the task itself to offer an intimate, personal exploration into his passion and personality. Simply breathtaking.

What to watch next: Into the Grand Canyon

If you share a love for, or at least a fascination of, Disney's beloved theme parks, this has got your name written all over it. The new Disney Original documentary provides a backstage pass to the history and creation of these 'happiest places on earth'.

While innately self-indulgent, each episode is entertainingly educational, varying its observations from what it takes to become a Disney 'Imagineer', who dreams, designs and builds the worlds and everything in it, to seeing which Disney ventures failed or never even got off the ground, to Walt and Roy Disney's supervision over the construction and opening of the most iconic parks.

A new episode in the six-part series drops every Friday.

What to watch next: Waking Sleeping Beauty

The importance of sound in film is irrefutable, but rarely to the extent that it is in Pixar’s WALL-E, where sound is both the narrative and language of the largely dialogue-free animation. That's why it appears on our 15 of the best film scenes to test surround sound list too.

In Dolby Atmos, or even 5.1, this charming robot romp is an audio treat. It's also a visual and narrative feat, a space spectacle that compels with its creative ingenuity. We really want that long overdue sequel, Disney. Please?

What to watch next: Inside Out

Disney might be best known for its timeless animations, but its early forays into live-motion pictures (which – fun fact for you – kicked off with its 1950's Treasure Island) have thrown up some family-friendly masterpieces. Defiant nods go to Bedknobs and Broomsticks, Pete's Dragon and Mary Poppins, natch, but Homeward Bound, which sees two pet dogs and a cat journey across California to be reunited with their holidaying owners, gets our heartiest recommendation. Because if a heartwarming cat and canine comedy caper can't cheer us up during this difficult time, what can?

What to watch next: George of the Jungle

Firstly, the 1994 original is invincible (and also available on Disney Plus). Of course it is. But as Jon Favreau's live-action, (almost) scene-for-scene remake is one of the most visually spectacular films we have ever seen in theaters, its technical accomplishment alone makes the film compulsory viewing for anyone with a capable home cinema. It's not a bad remake, either; there are some playful additions and there's also Beyonce's magnetism – it simply misses the original's heart and, er, originality.

Missed any of Marvel's 25-odd The Infinity Saga movies in the past decade? Well, now's your time to catch up. If Black Panther is indeed one of your blind spots, you're in for a treat, as there's a strong argument for it being one of the studio's most original, most character-focused and most consistently thrilling features yet. The sequel is slated for a 2022 release, so you've got plenty of time to get up to speed.

What to watch next: Ant-Man

After Toy Story 4's Forky became everyone's favourite plastic fork, how could Disney not create a spin-off for the beloved character? Forky Asks a Question is a series of brilliant, bite-sized animations that answer Life's Big Questions in an amusing, lighthearted way. A harmless way to pass a few minutes.

Currently, only 'What is Money?' is available in the UK and Europe, so we'll have to sit patiently for 'What is Cheese?'. Enjoy this snack-sized format? Watching the very weird but equally wonderful Chinese short Bao is a very fine way to spend seven minutes.

What to watch next: Bao

Arguably the best noughties addition to the Star Wars franchise (sorry, trilogies), Rogue One, set in the midst of the galactic war between the Empire and Rebel Alliance, sees the rebels on a conquest to retrieve secret Death Star plans to expose and destroy the weapon of mass destruction.

Without the responsibility to pander to the franchise's other narratives, this standalone prequel is allowed to create characters and a tone of its own while satisfying fans with the obvious Star Wars DNA that runs through it. And it's all the better for it.

There are some cool extras to help cool you down afterwards, too.

What to watch next: Star Wars: The Clone Wars

As the franchise hits its fourth installment and third decade, Toy Story still manages to retain the beautiful animation, morally high-message and bedrock charm and camaraderie of Woody and the gang. While perhaps more accustomed than ambitious, Toy Story 4 sees the toys embark on their most adventurous road trip yet, with new locations and characters (including Forky!) but the same old fun and tearjerking emotion, leaving us hopelessly wishing that this isn't the end.

What to watch next: Cars