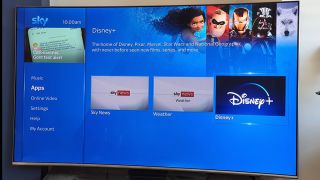 The Disney+ video streaming service has launched in the UK (and several European markets), bringing a whole host of new and old Disney films and TV shows, plus content from the company's subsidiaries such as Marvel, Pixar, National Geographic and more.

It can also be found on Sky, so long as you have Sky Q. It isn't available on Now TV, for now.

How to get Disney Plus on Sky Q

Disney Plus should appear as an app in the Apps section of the Sky Q menu. Simply scroll down to Apps, then scroll through the available apps – Disney Plus was the last on the list for us (see picture, top).

If the app doesn't appear, you might need to force a software update on your Sky Q box. See below for instructions:

The Disney Plus app will then be integrated into the Sky Q interface, which means suggested content will show in your Home section – the same way Netflix programmes do for Netflix subscribers. And it's easy to dive straight into your favourite Disney Plus films and TV shows from the Sky Q TV guide.

No Disney Plus 4K on Sky Q

Sadly, Disney Plus is limited to HD video at launch on Sky Q, with Marvel and Star Wars films all showing in HD and 5.1 sound (as opposed to 4K, HDR and, in some cases, Dolby Atmos and Dolby Vision).

Sky has confirmed it will be adding Disney Plus content in UHD in the coming weeks. "Sky is working to update all compatible Sky Q boxes so that customers will be able to enjoy Disney+ in full UHD this summer," it reads.

That should be (hopefully closely) followed by HDR support, as Sky Q's delayed HDR update is slated to hit boxes by the end of the year.