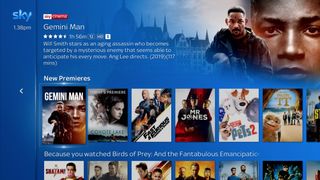 HDR arrived on Sky Q last month with three on-demand Sky Nature documentaries, and, as promised, HDR support has now rolled out to the Disney Plus app found on the Sky platform. The update, which begins rolling out today, gives Sky customers who subscribe to Disney’s video streaming service access to titles in 4K HDR, including Star Wars: The Last Jedi, The Lion King (2019) and Toy Story 4.

HDR support for the Netflix app on Sky Q should follow in the coming months, although Sky is yet to specify a date. More Sky Nature shows, Sky originals and Sky Cinema movies in HDR will arrive for Christmas, while HDR live sport will be available next year. To watch HDR on Sky Q, you'll need to have a compatible Sky Q box.

Sky has also given its service a facelift, bringing some changes onboard in an effort to enhance the user experience. The interface now features ‘expanded view’ (pictured top), which replaces the static sidebar menu with a collapsible one that lets users see more of the content they’re watching or browsing.

Each show now has a ‘show centre’, too, a hub from which users can access all seasons, episodes, broadcast schedules and on-demand links. Sky has also added a ‘smart’ button similar to Netflix’s ‘continue watching’ / ‘play next episode’ one.

Sky has also advanced its voice search. Users can now ask for content based on themes, genres and actors. Saying “thrillers with Nicole Kidman”, for example, will bring up relevant suggestions. This will soon work for "new shows", "Halloween" and "Christmas", too.

The changes to Sky Q will start rolling out today, with all customers having the new-look Sky Q by 12th August.