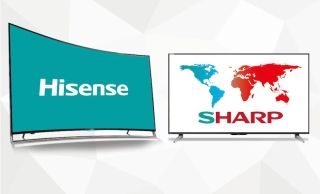 The deal sees Hisense buying all equity and assets of Sharp's TV factory in Mexico, as well as the right to use the Sharp brand name in north and south America. Sharp pulled out of the European TV market last year.

Hisense, formed in 1969, claims to be the fourth largest TV manufacturer in the world, selling its products in more than 130 countries, although it has yet to become a household name in the UK. It is planning to launch a range of 4K TVs in the UK later this year and employs 75,000 people worldwide, generating sales of $16bn in 2014. The firm also has a stake in Loewe, supplying panels for the high-end German TV company.

Sharp was established in 1912 and made its name as one of the early pioneers of LCD TVs. More recently it has focused on a new range of 4K Ultra HD TVs running the Android TV platform.

MORE: See all our Sharp reviews