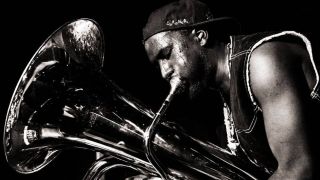 The British Music Embassy has teamed-up with MQA, a host of UK artists, selected music titles and What Hi-Fi?, to deliver a one-off concert that you can watch from the comfort of your own home.

Following the cancellation of South by Southwest (SXSW) due to the coronavirus pandemic, Production Park’s The Mill Studio in London will host a concert featuring the UK artists and bands who were scheduled to play at the influential festival in Austin, Texas.

The concert is scheduled to begin at 14:40 (GMT) and the sessions will be held behind closed doors but live-streamed to the world via the What Hi-Fi? YouTube channel. All the artists' performances will subsequently be available in HD video complete with high-quality MQA audio via the MQA Live website.

The sessions are supported by the British Music Embassy, with the line-up curated by DIY Magazine, Jazz re:freshed Outernational and cSquaredLDN.

Bands and artists set to perform include Theon Cross, King Nun, ELOÏSE mp3, Superbird and Noya Rao, with each act performing a 30-minute set. The schedule is as follows:

Mike Jbara, MQA CEO, said: "We’d like to thank all of the British Music Embassy partners for organising the SXSW sessions from London. MQA is committed to enabling artists to provide the best audio to their fans in all listening environments: we launched our ‘audio+video’ solution last year and are very pleased to provide this support during these challenging times. When high quality video is matched with MQA audio, our partners believe the experience is the next best thing to being there."

This concert follows the launch of The Master Sessions, a series of live concerts streamed in MQA studio quality around the world. The first, on the 5th February, saw 10-piece Mercury Award nominees SEED Ensemble perform live at London’s British Grove Studios.

Watch the British Music Embassy and MQA sessions live on the What Hi-Fi? YouTube channel from 14:40 (GMT), Wednesday 18th March 2020