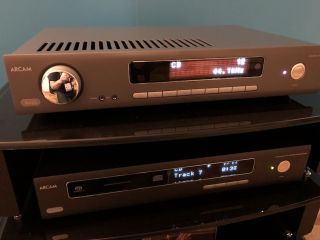 Arcam has used CES to reveal (prototypes of) its new three-strong HDA range, which the company is heralding as its “best performing range of audio products yet”.

The range comprises the CDS50 SACD/CD player and SA10 and SA20 integrated amplifiers.

Specs are scarce at this stage, but we do know that the SACD/CD player is more versatile than its SACD/CD player category suggests, as it also boasts network streaming.

Both amplifiers sport an array of analogue and digital connections – including five RCA, two coaxial and optical inputs – and come with a backlit remote.

All three products will be available in the UK in spring, and we expect we'll see more of them at the Bristol Show in February - and hopefully as finished articles, too (Arcam says the finish of the chrome controls will be darker than they are in the above picture).

Chord launches Qutest, a DAC in the Hugo 2 mould