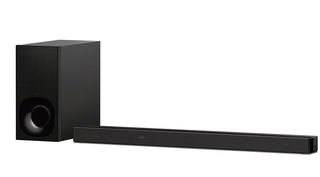 We’re not sure how long the ‘world’s first’ title will last, but the Sony HT-ZF9 is the first 3.1-channel soundbar with Dolby Atmos and virtual surround sound technology.

Unlike the HT-ST5000 (which features upward-firing Atmos-enabled drivers), the HT-ZF9 is designed to emit three-dimensional sound using a new Vertical Surround Engine – which adds height without the need for additional or upward-facing drivers.

This combines with Sony’s S-Force Pro Front Surround technology to give a more involving surround sound experience from the bar and separate subwoofer. The ZF9 supports Dolby Atmos and DTS:X soundtracks, and features 4K, HDR and Dolby Vision passthrough.

You can also employ this surround effect on non-Atmos/DTS:X sound by pressing the Vertical-S button the remote, which can upmix two-channel music to 7.1.2 channels.

The ZF9 has two HDMI inputs and one HDMI output, and can also be used with Google Assistant. It can play high-resolution music off a USB stick, and features wi-fi, Google Chromecast built-in, Bluetooth, and Spotify Connect.

There was another soundbar revealed, the HT-XF9000, which is a 2.1ch soundbar that also employs Dolby Atmos and the Vertical Surround Engine. It also features Bluetooth and USB connectivity.

Both soundbars are designed to fit in with Sony’s 2018 OLED and LCD TVs, and are due in Spring 2018, with pricing TBC.