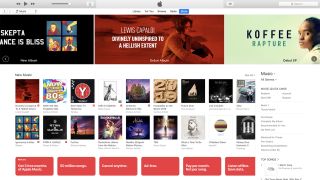 iTunes, you've had a good run. The increasingly frustrating to use software looks set to be put out of its misery next week, with Apple set to replace iTunes with the launch of three new apps: Music, Podcasts and TV.

According to a report by Bloomberg  , Apple will announce the end of iTunes at the Worldwide Developers Conference (WWDC), which begins on Monday. The move aims to bring the Mac in line with iPad and iPhone, where music management is already within separate apps.

The "iTunes Music Store" launched back in 2003, heralding a new age of digital music and downloads. iTunes became the biggest online music store and the de facto digital library on Mac and PCs, not least if you wanted to put music on your iPod or iPhone. Now it seems it has served its purpose.

With streaming overtaking downloads, and Apple eager to push its own Apple Music service, iTunes looks set to be deemed surplus to requirements.

The move will reportedly be part of a wider focus on apps and software at WWDC, with Apple looking to improve its offering, including upgrades to Messages, Maps and Mail.

WWDC gets under way on Monday 3rd June in San Jose, California.