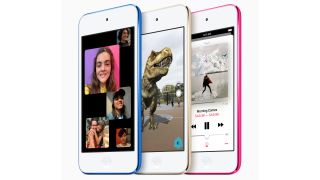 The rumours were right: Apple has launched a new iPod Touch, its first new iPod Touch in around four years. This 2019 iPod Touch has been upgraded in just about every area, with boosted tech specs across the board and some new features.

The A10 Fusion chip aims to up the performance ante and Apple is promising three times faster graphics ahead of the launch of Apple Arcade, a game subscription service, later this year. For the first time on iPod you will be able to access augmented reality (AR) experiences and Group FaceTime, too.

The new iPod touch is available in six finishes; space gray, white, gold, blue, pink and (PRODUCT)RED, and you can order from today on apple.com.

So five years after the end of the iPod Classic, the iPod Touch lives to fight another day...