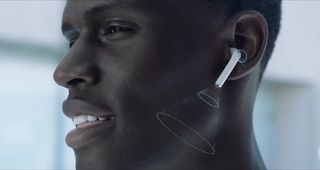 Refering to “Earbuds with Biometric Sensing", Patently Apple explains the system is built around a photoplethysmogram (PPG) sensor able to detect blood-flow by shining a light onto an area of skin near the ear's tragus.

By tracking blood-flow, the PPG sensor can offer information on the wearer's heart-rate, VO2 (the maximum rate of oxygen consumption) and temperature.

This is the same kind of technology that's used in the Apple Watch. But conventional earbuds don't usually make constant contact in the same way a watch does, so the reliability of the data can be called into question.

As well as biometric measuring, the earbuds could also provide noise-cancellation to eliminate audio within a 10-20 degree window - so wearers would still be able to hear nearby conversations - or cancel outside sound altogether.

Of course, Apple isn't the first company to experiment with health-tracking headphones. In 2014 SMS Audio and Intel collaborated to produce the BioSport, which used built-in biometric sensors to measure heart-rate and collect fitness data.

More recently, Bose's SoundSport Pulse - our best in-ear wireless headphones - give a live read-out of the wearer's current heart-rate, with the information being sent to popular third-party apps including Strava, Endomondo and MapMyRun.