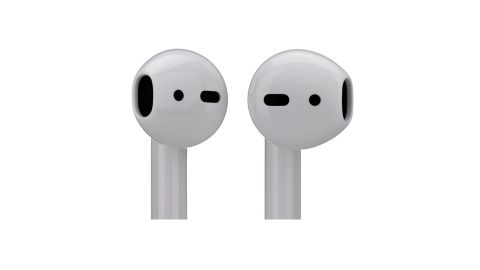 The Apple AirPods are true next-generation wireless headphones, but sadly they are only of average sound quality

First of all, let’s get this off our chest: the Apple AirPods look a bit daft. Or, more specifically, they make you look a bit daft when wearing them.

For one, they look like a pair of the wired EarPods with the cable snipped off, and there’s something awkward about the way the elongated ‘arm’ and bright white finish draw the eye as a pair of earrings does.

Having said all of that, ubiquity appears to have fostered acceptance, and AirPods no longer draw the slightly mocking glances they once did. We'd still prefer a less attention-grabbing black option, though.

Putting the styling pros and cons to one side, you’ll find that the AirPods are an absolute marvel in terms of tech. Even in this age of miniaturisation, they’re absolutely tiny, weighing just 4g per earphone.

Many "true wireless" headphones have appeared since the launch of the AirPods, but none get even close to the tininess of Apple's originators.

Almost as impressive is what Apple has done to streamline the pairing process. With the AirPods you simply open the carry case lid in the vicinity of your iOS device and a window pops up asking if you want to connect the two.

Not only are your AirPods paired with that device; they’re also paired with every other Apple device (as long as it’s running recent software) that you’re signed into via iCloud.

It’s all thanks to Apple’s W1 chip, which is still only built into the AirPods and Beats’ PowerBeats3, Solo3 and BeatsX headphones.

It’s so quick and simple it makes the current Bluetooth pairing method (enable pairing on both devices, attempt pairing, check codes and hope for the best) seem archaic.

You still use that method to connect the AirPods to a non-Apple device, though, thanks to a pairing button on the back of the carry case.

That case isn’t just a neat place to keep your AirPods (although it has a lovely magnetic action that pulls the earphones into their slots) it also keeps them juiced-up.

The AirPods can handle about five hours of constant music, but the case holds around another 19 hours of charge.

Pop your AirPods in there and within 15 minutes they’re ready to rock for three hours. There’s also a Lightning cable in the box for when you need to charge up the case.

It’s an incredibly neat set-up, and one that means you should never pop the earphones only to find them dead.

If you have pretty standard sized and shaped ears, the AirPods will not only be comfortable, but also surprisingly secure.

Generally, we're able to run and cycle without them falling out, although some members of our test team fared less well, finding them a bit uncomfortable.

So how can you tell if the AirPods will work for you? Your best bet is to find an Apple Store where you can try them on, but if the wired Apple EarPods fit, you should be okay. The AirPods aren’t identical, but they’re very close.

The minimalist design and genuine wirelessness are the AirPods most impressive features, but they also introduce a tricky conundrum – how do you control them? The answer, perhaps predictably, is via Siri, but that’s far from a perfect solution.

Let’s say you want to increase the volume or skip a track. With a regular three-button remote you’ve got dedicated volume controls and a play/pause button that can be double-tapped.

With the AirPods you double-tap the shell of one of the earphones, wait for Siri to activate, say either “increase volume” or “skip track” and then wait while Siri thinks about it before carrying out your instruction.

Even assuming you don’t mind everyone around you thinking you’re talking to yourself, the whole experience is sluggish.

You can, of course, just remove your phone from your pocket, but that feels decidedly like a backwards step for a pair of headphones that are otherwise fantastically futuristic.

MORE: These are all the Lightning headphones you can buy right now

Apple has always been a tech company rather than a hi-fi company, so it’s no real surprise that audio quality takes a bit of a backseat compared to design and features.

You can find undeniably better sound for the same money elsewhere, but there’s nothing overtly bad about the performance of the AirPods.

The first thing to bear in mind is that this is not an isolating design, which means the AirPods don’t block outside noise.

That might be an issue for some people, but there’s something to be said for being able to listen to podcasts and music while maintaining some degree of awareness of what’s going on around you, particularly if you plan to use the earphones during a commute or regular jog.

The AirPods’ delivery is satisfyingly weighty, with a solid bottom end that doesn’t overplay its hand. Vocals are clear and the treble is rounded-off just a little at the top to avoid harshness without sacrificing too much sparkle.

The bigger dynamic shifts are handled quite deftly, too, so there’s no chance of not being swept away by one of Explosions in the Sky’s epics or your favourite soundtrack.

It’s in the fine details and subtleties that the AirPods are found wanting.

Play Radiohead’s Burn the Witch and those low-level dynamic variations that build the tension are missing, as is the full texture of the strings, which is what gives the track its earthy, organic qualities.

As more and more instruments are added to the ensemble, the AirPods struggle to maintain control, allowing strands to flow into one another and confusing the overall presentation.

Ultimately, this is the sort of sound you’d expect from an average pair of affordable earphones, but it’s contained within what is a pretty incredible feat of engineering.

In the end, it probably comes down to whether you’re prepared to put up with passable sound in order to get onboard with the next generation of wireless tech.

Of course, at What Hi-Fi? we care about sound a great deal, in which case we should probably recommend that you pass on the AirPods.

However, we can’t help but admire the AirPods which, almost two years since release, still stand alone in terms of reliability and miniaturisation.