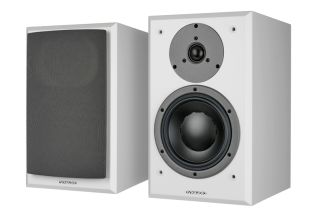 In the past 12 months, speaker engineers around the world have been tweaking here and nitpicking there in an attempt to deliver better performance for our hard-earned pounds. And by jove they've done it.

The most successful example of this is the Dynaudio Emit M20s, our 2016 Product of the Year in the hi-fi speaker category.

Before we clapped eyes on the M20s, the smaller Emit M10s did enough to bring the B&W 685 S2s down a rung, but then M20s came along. And they more than justify the extra outlay over their siblings, not to mention solid competition from the likes of Dali and Wharfedale, delivering greater power, impressive dynamic reach and more assured bass.

But the M20s were not alone in impressing us this year. In fact, we made room in our Awards to commend two more pairs of speakers than we did last year.

Take the Revel Concerta2 M16 standmounts (£950), one of the most entertaining pairs of speakers we’ve heard for less than a grand.

Then there are the £300 Tannoy Eclipse Three floorstanders, which don’t just offer a lot of cabinet for the cash, but also deliver a level of performance good enough to justify their inclusion below the Q Acoustics 3050 (£550) and Tannoy Revolution XT 6F (£1000) speakers – both of which claim Awards for a second year in a row.

First-time winners this year include the Mission LX-2 bookshelf speakers (£160) and the PMC Twenty5.23 towers (£2970). The Missions, which slot in under repeat winners the Monitor Audio Bronze 2s, take up the torch from the Q Acoustics 3020s and, if partnered correctly, promise as much verve and insight as you could hope for from an entry-level pair of speakers.

The PMCs – the priciest pair of Award-winning speakers this year – are the more affordable floorstanders in what’s so-far been a hugely impressive range. They retain a similar look and sonic character to the company’s previous Twenty versions, but put themselves ahead of both their predecessors and rivals when it comes to resolution, dynamics and punch.

The ATC SCM11 (£1200) and SCM19 (£1995) standmounts have become regular fixtures in our Awards issue, and once again their level of subtlety and truth-telling transparency remains unrivalled.

Powered speakers found their way into the desktop speaker category last year thanks to the triumph of the Wharfedale DS-1s and KEF Eggs, the latter picking up a Best Buy for the second year running for their cracking combination of style and sound.

This year, active speakers get their own sub-category, and it's won by the Dynaudio Xeo 2s (£995): a near-complete system in a speaker’s clothing. They require only a source to make them sing. And sing, they do.

Smaller albeit much-changed versions of the five-star Xeo 4s we tested last year, the Xeo 2s pip the more affordable Dali Zensor 1 AX and Wharfedale A1 options when it comes to picking our best 'sound-per-pound' active speakers.

Here, then, we give you 12 of the best-value hi-fi speakers on the market. Now, it’s over to you to decide which is best for you and your system...