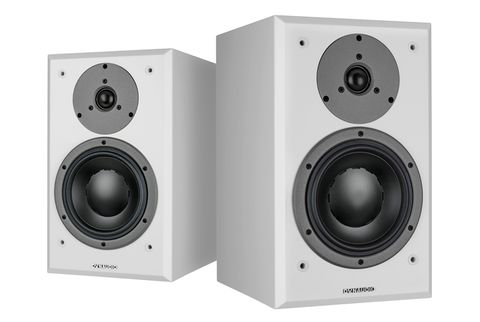 Another entertaining Emit speaker, as meticulous as they are merry

If you read July’s What Hi-Fi?, you’ll have seen that the Dynaudio M10 bookshelves (£500) made a huge impression, knocking the B&W 685 S2s, two-time Product of the Year winners, off their pedestal. That takes some doing.

Now it’s the turn of the Emit M20s – larger versions of their impressive siblings – to try and make their mark.

Place them side-by-side and the M10s and M20s are akin to one of those Russian dolls, same dimensions but made to a different scale.

They both sport a satin lacquer (available in either white or black) and driver-dominated baffle that, thanks to a symmetrical smattering of screws bordering the drivers, looks as though it has been used as target practice.

But it’s not just the M20’s 36cm height and 27cm depth that qualify them as the superior bookshelf model in the Danish company’s entry-level speaker range.

As is the Dynaudio way, new drivers have been designed specifically for each Emit model, with the M20 featuring a 28mm soft dome tweeter and 17cm magnesium silicate polymer mid/bass driver – up from the M10’s 14cm.

That bigger driver goes a long way to explaining the M20’s greater ambition when it comes to authority, scale, dynamics and bass depth.

That is, after all, what you should expect from a larger bookshelf. But more importantly, that hasn’t come at the expense of musicality and agility along the way.

In Ludovico Einaudi’s Ancora, piano sequences bask in nuance and texture, to the point where it sounds not so much as though he’s striking keys, but giving you a personal lesson in advanced piano playing.

While the M20s can hardly play their sibling’s small card hand, the scale and openness they exhume is nonetheless impressive.

Dynamically, the Dynaudios are always on the move within their generous range, proving as capable with explosive changes as subtle ones.

Each piano note is solid, exact and punctual – even if in absolute terms they sometimes trade outright control for fun.

Unlike some speakers that favour certain music genres, the Emit 20s are game for everything, including the glitchy synths and intensely heady electro-beats in 65daysofstatic’s Prisms.

They whisk through the song with attack and explosiveness, and even in the most complex, cacophonous moments find the discipline and rigour to pick out the multiple trails of thought – rhythmic drums, ambient guitar lines, cutting cymbals – without sidelining any element.

They exhibit the audacity of the Dali Opticon 2s, but stabilise it with a pleasant smoothness and refinement, and that winning algorithm makes them so listenable and versatile.

Though they aren’t quite as flexible with poorer recordings, the M20s aren’t afraid to lift the lid on the slight bright and edgy quality of The Cure’s Kiss Me, Kiss Me album, revealing the recording’s constrained nature.

While that’s further proof of their transparency, it’s also a warning that you won’t get the best from them playing below-par recordings.

Nor will you by shoving them up against a back wall, for when it comes to placement they require a bit of room to hit the right tonal balance.

Toeing them in slightly helps with stereo imaging too, so that when we finish our testing with Traffic’s John Barleycorn Must Die, tambourines, flutes and guitar plucking are all precisely mapped on the sonic landscape.

With both the M10 and M20 bookshelves receiving five-star reviews and Group Test-winning status, it’s a thoroughly impressive two from two for the Emit series.

If you, or rather your room, determines that the more scale, dynamic range and bass the better, the M20s are bang on the money.