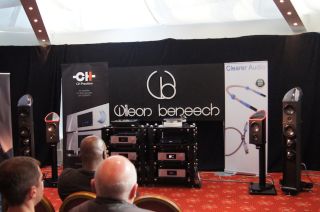 Couldn’t make it to the Bristol Show this year? Well, we're sorry to say you missed out. But you can at least relive the best bits through our speaker and turntable round-up videos, our choice of the 13 best new products, and this, our pick of the best demo rooms at the show.

Within the hotel walls were an original TEAC reel-to-reel recorder, a £20,000 Technics turntable, and even glow-in-the-dark speakers and seats (thanks, KEF). Below are the rooms that caught our collective eye and had us putting-up our feet for that little bit longer…

Dynaudio won the ‘Best in Show’ Clarity Alliance award at Bristol for its Special Forty speaker demo, which not only gave us the chance to remind ourselves why we like them so much, but also to admire its Bowie backdrop. Naim was well-represented in Dynaudio’s room, too - driving the standmounts was the Naim NAP 300 DR power amp (£6000), paired with Naim’s NDS streamer (£7500) and NAC 252 preamplifier (£6630).

As is the norm at the Bristol Show, it takes a degree of discipline to walk into Wilson Benesch’s vast expanse of a room and not yearningly point at everything in it like a kid in a sweet shop. This year was no different, with plenty to clap your eyes on and ears around, including its Resolution speakers (£35,500, launched at the Munich High End Show 2017), Discovery 2 speakers (£15,500) and a smattering of CH Precision components - all sitting pretty on Wilson Benesch’s R1 rack.

Arcam and Revel shared a room - they share the same parent company, Harman - and the former's imminent HDR range of separates, the CDS50 streaming CD player, and the SA10 and SA20 integrated amplifiers, took centre stage. Their demonstration gave us our first sonic glimpse at what’s supposedly the brand’s best-ever performing components but also another listen to the Award-winning Revel Concerta2 M16 speakers.

When you’ve got a does-it-all, just-add-speakers, one-box system like Quad’s new Artera Solus (£1500), there’s a lot of pressure on one product. Helpfully, Quad demonstrated the Solus’ versatility by pairing it with both the company’s top-ranging ESL-2912 electrostatic giants (£8000) and its dinky, 16-times-more-affordable S-1 speakers (£500). For that, it won the Clarity Alliance’s ‘Best Display’ accolade, and we have to say; the Solus appeared to hold its own with both pairings.

We weren’t surprised that Astin Trew triumphed in the Clarity Alliance's ‘Best Sounding Hi-Fi Demonstration’ category, extraordinary as it was in both the quantity and quality of its display. The room included its AT2-8100 phono stage (£695), AT2-5100 power amp (£3495) and AT2-1100 pre amplifier (£1195); Planalogue’s Prelude turntable (£2995); Graham Audio Chartwell LS6 monitors, and, what your eyes will surely linger over longest, an original TEAC A-3300SX reel-to-reel recorder. Their presentation of Lyn Stanley’s jazzy arrangements (coupled, at times, with Stanley’s live accompaniment - there she stood, singing away) was arguably the highlight of the show.

As interesting to ogle at as to listen to - and arriving with high expectations due to the success of their siblings - were the new Neat Iota Xplorer speakers. They were in worthy company alongside Rega’s RP6 turntable and Fono phono stage, Chord’s Qutest DAC (£1195) and Heed’s Elixir amplifier (£950). And yes, they look a bit like minions.

The British audio brand chose the Bristol Show as the exclusive stage to show off prototypes of its upcoming Titan 505 standmounts. The story behind them? Technology from the company’s flagship Titan 808 models has trickled down to create two smaller and more affordable floorstanders, the Titan 707 and 606. And now it’s the turn of the 505s to show that legacy can be brought to a standmounter too. To help showcase that was the Naim Uniti Nova and the Innuos Zenith SE music server.

The Bristol Show was fairly short on visual demos, which perhaps made our curated demo stand out even more - if we say so ourselves. Using the LG 65in Wallpaper OLED TV, Denon AVR-X6400H AV amp and a Cambridge CXUHD and two Oppo UDP-203 4K Blu-ray players, we approached the latest technological quagmire that is HDR head-on, showing the differences between standard dynamic range, HDR10 and Dolby Vision. With the help of Spider-Man.

See you next year!