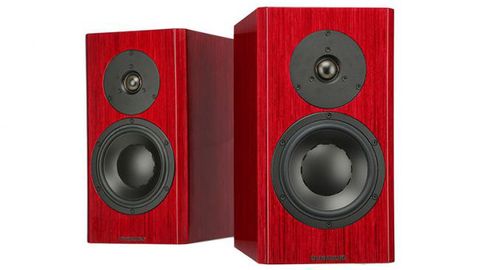 We have a confession. Our first impression of Dynaudio’s 40th anniversary speaker is more one of mild disappointment than anything else. It’s not that there is a lot wrong with the Special Forty - it's just the design seem a little too familiar.

Dynaudio has made any number of two-way standmounters, of this size and with drive units that look pretty much identical to the ones used here.

Put aside the gorgeous finishes – the options are Birch in either grey or red gloss – and there seems little to differentiate the Fortys from a stack of products the company has made in the past. Except pretty much all of them were way cheaper.

But things start to look brighter once we delve into the details. These speakers are indeed designed as something of a homage to the company’s past, but they’re not meant to be museum pieces.

That drive unit array may look straight out of the £600 Emit 20 (or even the Contour 1.1 from over a decade ago), but it’s actually based on the drivers used in company’s high-end Confidence C1 model that retails for ten times this price.

Dynaudio didn’t just plonk in the units from the C1 - the drivers have been fettled, with markedly improved results.

The engineers worked on improving airflow and damping behind the 28mm tweeter dome - the idea is to reduce back-pressure as the diaphragm moves, increasing detail and lowering distortion. The motor system has also been tweaked.

That 17cm mid/bass unit still uses the company’s traditional MSP (Magnesium Silicate Polymer) cone – it’s a one-piece cone using the large dome in the middle to aid rigidity. But much else has changed, from the suspension to voice coil former and magnet system.

Dynaudio claims this to be the best 17cm mid/bass unit it makes, which is quite some claim considering it has far pricier two-way models on its books using similar drivers.

The tweeter and mid/bass units are mated by a relatively simple first order crossover designed to minimise phase and impedance issues.

Each drive unit can cover quite a wide range – the tweeter is can delve to 1kHz, while the mid/bass is comfortable up to 4kHz – but the crossover point is fairly conventional at 2kHz.

Our Special Forty review samples aren't brand new, so it doesn't take long for them to come on song. Positioning is simple - we end up with them placed on solid stands, a metre or so from the rear wall with just a hint of angle towards the listening position.

These speakers don’t provide a particularly difficult electrical load – nominal impedance is claimed to be 6ohms – so most price-compatible amplifiers will be happy driving them.

We use both our reference Gamut D3i/D200i pre/power and a Roksan Blak amplifier for this test, without issue.

How do the Fortys sound? We keep coming back to three words in our notes: confident, muscular and subtle. We start with Holst’s Mars and the Special Fortys respond with glee.

They sound far bigger and more authoritative than a speaker that stands 36cm high has any right to.

Part of this is down to powerful, well-extended bass that balances weight and agility superb. The rest of it is down to a combination of composure and dynamic reach that allows these boxes to cope brilliantly with the demanding crescendos of this piece.

They image well too, the orchestra organised with precision and stability. There’s a good sense of depth, which extends the presentation well beyond the confines of our listening room. We like the tonality too.

There are more neutral alternatives – ATC’s mighty SCM19s come to mind – but the Special Fortys are even, cohesive and nicely balanced.

They’re also magnificently detailed, digging out the low-level acoustic clues that define a recording venue with ease. This resolution is apparent whatever genre of music we play.

We love the way these speakers reveal the texture and attitude in Jill Scott’s voice on Gettin’ In The Way.

There’s a natural fluidity to this speaker’s midrange dynamics, and we admire their ability to tie a multitude of instrumental strands together in a convincing and musical way.

They’re surefooted when it comes to timing and rhythms too, rendering the changing momentum of a piece well while keeping our toes tapping.

Moving to Bruce Springsteen’s Radio Nowhere shows the Fortys can cope with dense production while delivering a sound with drive and plenty of energy.

While these speakers are great at revealing low-level information, they’re just as happy to rock along with something and just entertain.

The Special Fortys are easy speakers to underestimate. They’re not an overtly cutting-edge design using the latest in high-tech materials, nor are they styled to stand out in a crowd.

But once we start listening none of that matters. We’re far too busy having fun.