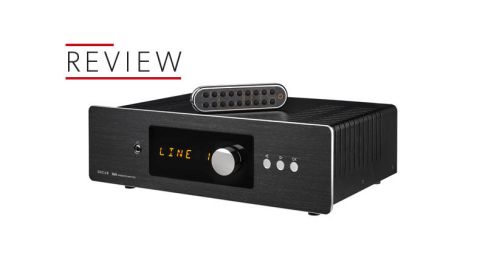 It’s a testament to the quality of Roksan’s Blak integrated amplifier that our biggest issue with it is the deliberately misspelled name.

Other than that, it’s a superbly rounded product that’s well made, sensibly featured and capable of very fine sound.

Roksan has decided against the minimalist approach with this design.

If you want just a premium line-level analogue integrated, we would point you towards the company’s still excellent Caspian M2 (£2000), provided its 85W per channel output is up to driving your speakers to the levels required.

But if you need a fully equipped unit that can connect to your computer, smartphone, turntable and headphones, the Blak makes a mighty strong case for itself.

Particularly when you consider its impressive muscularity - it's rated at 150W per channel into an eight-ohm load, rising to 230W as impedance halves.

This is a hefty amplifier in every respect. It weighs in at 14kg - and runs a little warm too, so make sure there’s enough space around it to ensure good ventilation.

The Blak feels well built - it’s solid, nicely finished and a pleasure to use. There’s a bit of a Fisher Price vibe to the unduly large display, though at least you can read it from a distance even in bright sunlight.

There are a few oddities that need to be accommodated, though. The main power switch is hidden on the left-hand lower edge, while plugging a pair of headphones in – there’s a 6.3mm output on the front panel – won’t switch the sound away from the speakers unless you select the headphone output through another switch located beneath the centre of the front panel.

Lastly, the volume level works in steps of two rather than one. Odd.

Get past these eccentricities and you’ll find the Blak accommodating of both partnering equipment and musical genres.

There’s plenty of connectivity. Traditionalists will be kept happy with balanced XLRs, three single-ended line-level inputs and a moving magnet phonostage. Those into digital get a USB Type B that will cope with 24-bit/192kHz PCM as well as DSD music files.

Unlike most similarly priced rivals, the Blak has embraced aptX Bluetooth connectivity too - so listening to music from phones, tablets as well as computers is easy. Outputs are limited to the headphone socket on the front panel and a single set of high quality WBT speaker terminals.

It takes a few days of running before the Blak really comes on song, but even from the first few minutes of listening the signs are good. Our initial impression of an enthusiastic, big-boned presentation remains unchanged throughout the test.

We start off with Holst’s Mars and are greeted by a large-scale sound that’s freighted with authority and power.

The album is packed with dense, textured low frequencies and the Blak responds with glee, delivering them with all the punch and presence they deserve.

There’s a lovely sense of ease, even when the music becomes demanding and volume levels rise. That impressive claimed power output rings true.

The music’s wide-ranging dynamics are delivered with plenty of drive. There’s little sense of the amplifier holding back as crescendos come through with tangible impact. The Roksan stays composed throughout.

This amplifier renders a lovely soundstage, painting instruments with a steady brush and positioning them with skill on an expansive canvas. It’s a stable presentation, the instruments staying locked in place even as complexity rises.

We switch to Nina Simone’s Ain’t Got No, I Got Life and it charges along, packed with energy. Simone’s characterful vocals are delivered with verve, yet there’s enough in the way of nuance and texture to keep purists satisfied.

At the top end there’s plenty of bite, but enough in the way of refinement to stop things from getting too aggressive.

We try out the moving magnet phonostage and are pleased with what we hear. It’s a lively sounding circuit, reflecting the insight and transparency delivered through the line inputs.

Noise levels are low and, unless you have a premium deck costing, say, £1500 and upwards, we can’t see a reason to use anything else.

Regardless of whether we play Nick Cave’s moody Push The Sky Away or Kanye West’s frenzied Yeezus, the DAC takes it all in stride, serving up a detailed and entertaining sound.

It’s a shame the company hasn’t seen fit to offer coax or optical inputs options. The Bluetooth performance isn’t so pleasing, sounding thinner and notably less expressive, but that’s as much the limitations of the transmission method as it is a character of the Roksan.

The important thing is the amplifier is open to a wide range of sources and connects swiftly.

We also try out the headphone output. Once we find the hidden switch to put these into circuit, we’re impressed. Often headphone circuits are box-ticking exercises for most manufacturers, but this one isn’t.

It sounds punchy and detailed, delivering a similar character of sound to that we hear through the speaker outputs.

The Blak amplifier is superbly judged. It has a powerful and energetic sound, with enough in the way of insight, subtlety and refinement to keep us happy.

It’s also well equipped, and capable of sounding right at home in a wide range of system. Recommended? You bet.