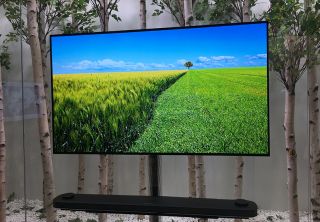 Another year, another IFA. Europe's biggest technology show is a chance for brands, big and small, to show off their latest innovations and give us all an idea of the next tech trends.

And from what we've seen this year, it's OLED TV and voice-controlled smart speakers all the way. But there was plenty more.

From giant TVs to turntables to even a glass, transparent display (no, really), here's our pick of the most exciting things we saw at IFA 2017.

Want to see more new products? You can check out our Instagram feed, plus this gallery of all the new smart speakers launched at IFA.

The LG V30 claims a lot of firsts: the first globally available smartphone with MQA compatibility, the first to have a 'FullVision' OLED display, and the first to feature a glass lens with F1.6 aperture for its dual cameras.

The 6in 2880 x 1440 OLED screen looks gorgeous, but we're more interested in the sound quality - the V30 packs a 32-bit Advanced Hi-Fi Quad DAC that's been tuned by B&O engineers, so we're hoping for a sound quality that's head and shoulders above its rivals, which based on the LG G5 with Hi-Fi Plus DAC, is certainly possible.

Could 77 be the new 65? We already knew the larger screen size was in the works back at CES 2017, but this is the first time we've seen the 77in OLED screens from Panasonic, Sony and LG in person.

And they're huge. And expensive.

But it wasn't just big versions of existing OLED ranges to whet our 4K TV appetite.

The new TVs not only feature three-sided Ambilight, HDR and a better picture processing engine, they're also UHD Premium certified.

They even come with their own sound systems: the 65in 8602 TV has a 'floating' soundbar, while the 65in OLED flagship comes with a meatier 60W soundbase.

It's not a sexy name, but the Sony LF-S50G has us excited: wi-fi, Bluetooth, gesture controls, splash-proof cover in two colours (black, white) and, this being Sony, a particular attention to ensuring its 360-degree sound performs better than the current crop of smart speakers.

This little Sony costs just £200, and is due out in November - we can't wait to try it out.

The Panasonic SC-GA10, Onkyo G3, and JBL Links 10, 20 and 300 are just some of the other smart speakers with Google Assistant that we spotted at IFA.

Not keen on Google's AI? How about a snazzy-looking Alexa-powered speaker then? Harman Kardon's Allure may look like a food processor, but it has 360-degree ambient lighting (that reacts to voice commands and changes with the music!) to complement its 360-degree sound.

It features Bluetooth streaming, will cost £250, and... that's about all we know for now.

MORE: Here are all the many, many smart speakers on show at IFA 2017

Another IFA, another Sony Walkman launch. But instead of the flashy gold number we saw last year, this year Sony has gone for a Walkman that's made of aluminium, glass and serious sound credentials.

In our brief hands-on with the Walkman at Sony's stand, we thought it pretty impressive. We look forward to getting stuck into a full review.

There was thankfully some new hi-fi on show at IFA. We spotted Dali's new Callisto hi-res multi-room system, complete with the new Callisto 1 standmounters and Callisto 6 floorstanding stereo speakers.

The speakers connect wirelessly to a Sound Hub, which features Bluetooth, optical, coaxial, analogue and USB inputs. You can stream 24-bit/96kHz audio over wi-fi, and the system uses Lenbrook's BluOS multi-room app and platform. Still no word on pricing, but we're keen to test the system out.

The 70in screen will feature a resolution that's 16 times that of Full HD. It's a good thing the company has its own 8K satellite broadcast receiver, then.

In other crazy display news, Sharp also showed off a 60in roll-up LCD TV (pictured). Because why not? LG has been bending and rolling up OLED screens for a couple of years now, so why shouldn't LCD join in on the fun?

MORE: 8K - everything you need to know