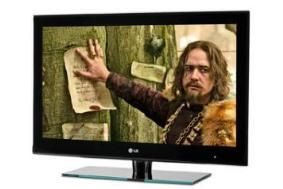 If you’re a fraction off the pace in a race like this, you’re nowhere – and the LG can’t seriously trouble the front-runners

Earlier in 2010 we looked at LG's 32LE7900 as being representative of the new wave of smaller LCDs.

Sure enough, it saw off some of 2009's veterans – but still came away with four stars. “Rather expensive,” we sniffed when confronted with the £1000 price-tag. Well, the LG's down to £850, which you'd think would help its chances. But it's down a star too. Let's explain.

There's no denying the 32LE7900's showroom appeal: it's slim, thanks to its LED backlighting, has diverting crackle-red accents to bezel and stand, and packs in a stack of features such as FreeviewHD reception, 100Hz motion processing and DNLA streaming.

Bright and punchy, but a bit soft
The first minutes of a test drive are equally encouraging. The LG's got the biggest, clearest on-screen menus around – set-up is as swift or as in-depth as you dictate – and the remote handset is simple and logical, too. All that on-line content is easy to get at and to navigate.

Off-air reception, whether standard- or high-definition, is characterised by bright, punchy images with a brisk colour palette.

Motion is handled confidently, and contrasts described well, but dense patterns cause the '7900 some anxiety.

There's a softness to skintones and textures, too, and those with flaky FreeviewHD reception will find the LG less determined to retain a signal than some rivals.

That softness carries over when the LG upscales a DVD of Infernal Affairs. While the film's plentiful black tones lack the out-and-out depth of others we've seen, images are stable and movement is tracked smoothly.

The colour balance is slightly toubling, too: while skin textures lack a touch of detail, skintones aren't entirely realistic.

Detail to the fore with BD
Detail comes to fore with a switch to Blu-ray content, mind you, which is just as it should be.

Much-needed crispness is introduced to the picture, and the 32LE7900's TruMotion 100Hz processing proves more successful here than in any previous LG we've tested. Some much-needed black depth is added to images, too.

Throughout, sound is open but thin – the kind of presentation acceptable only to TV manufacturers.