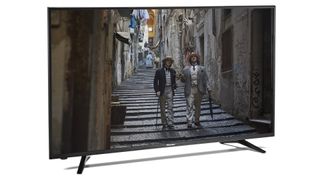 The laws of physics are cruel mistresses. It is they who keep your television’s audio quality at its current inadequate standard.

Today's flatscreens, with their ultra-slim profiles, simply don't have the enclosure space necessary to allow drivers to give you big, punchy TV sound for big action movies, or the detail needed for dialogue-heavy scenes.

Most TVs place their speakers at the bottom of the screen, firing downwards, and some are in the middle on the rear of the TV in an attempt to help spread the sound. Either way, it's hardly the best way to achieve a really immersive, impactful audio.

While some sets, such as Sony's AF9 OLED TVs and XG95 LCD TVs, have managed to incorporate speaker technology that delivers decent sound, and others like the Panasonic TX-55FZ952B, Philips 55OLED903 and LG OLEDE9PLA feature built-in soundbars, a large number of TVs still emit wispy, tinny sound that doesn't do justice to that gorgeous 4K, or even 8K, picture you're seeing.

So what are the best ways to improve your telly’s sound? Here are five different options that will instantly enhance your TV-viewing experience.

This is the most affordable way of improving your TV’s sound, and also the most versatile. Desktop speakers are relatively small, and can quite easily be placed close to your TV even when you have next-to-no space.

We’d recommend something like the five-star Ruark Audio MR1 Mk2s, which are engaging, capable speakers and feature an optical input on the back of the master speaker, so they can easily be connected to your TV. You should also consider the five-star Acoustic Energy AE1 Actives and the budget Steljes Audio NS3, both of which are ideal for improving the sound from your TV.

Alternatively, opt for the talented KEF LSX wireless system, which is packed with streaming features and multiple connections, and has the bonus of not needing a cable to connect the two speakers.

You can also pair a smart speaker with your TV to enhance audio output. One of the big attractions of the Amazon Echo Studio, for example, is that it can be wirelessly paired with any Amazon Fire TV device to bring cinematic Dolby Atmos sound to your living room.

If your favourite wireless speakers don’t have an optical input, you can always take the 3.5mm headphone out from your TV and plug that into your speakers’ auxiliary input. This way, you can let the TV control the volume, too.

Use your existing hi-fi stereo system

If you’ve already spent a lot of care and cash on a good pair of stereo speakers and a stereo amplifier, it makes perfect sense to connect up your TV and enjoy a considerable step up in audio performance.

Plenty of integrated stereo amplifiers, such as the talented Marantz PM6006, Cambridge Audio CXA61 and CX81, Audiolab 6000A and Rega Elex-R have optical inputs to take your TV’s audio output and deliver it to your speakers.

If you have a purely analogue amplifier, like the Award-winning Naim Nait XS3 or Rega Brio, you can use the amp’s RCA inputs and plug them into your TV’s corresponding outputs. Make sure you check your TV has analogue audio outputs, though, as newer TVs don’t always have this kind of legacy connectivity.

Alternatively, you can use an external DAC such as the Chord Mojo to take an optical signal.

The final step is to go into your television’s menu settings and ensure that it’s directing the sound output to your hi-fi system, not its own speakers.

TOP TIP: want more oomph in explosive scenes? Add a separate subwoofer to your hi-fi set up to create a 2.1 system.

Add a soundbar or soundbase

If you don’t have the space or budget for a traditional hi-fi or AV system, but still want to experience better sound from your TV, a soundbar or soundbase might just be the solution you’re looking for.

Not all soundbars are created equal, though. Dolby Atmos-compatible models such as the five-star Sony HT-ST5000, Award-winning Sennheiser Ambeo and impressive Samsung HW-N950 feature upward-firing speakers and give you a more immersive, 3D effect.

Most soundbars are slim enough to be propped in front of your TV on the stand (or positioned directly under your wall-mounted TV). Some bars, like the superb Dali Katch One or the chunky Sennheiser Ambeo, are quite tall, so watch out that the height of the bar doesn’t obstruct the IR sensor at the bottom edge of your TV.

Soundbases simply offer an alternative configuration; the flat base means you can place your TV right on top of it, or just slide it into your TV rack. The bigger cabinet means you get a bigger, bassier sound than a soundbar (the latter of which often comes with a separate subwoofer for that extra low-end reach).

While first-gen soundbars and bases only offer optical inputs, most modern products such as the Dolby Atmos-enabled Sony ST-HT5000, Yamaha YAS-207 and Sonos Beam include HDMI connections. The Sennheiser Ambeo Soundbar even supports HDMI 2.1 for extra flexibility.

Some, such as the Sonos Playbase, also offer plenty of streaming features for the likes of Spotify and Tidal, while the Beam adds voice assistants such as Alexa and Siri to its long list of features.

When it comes to connectivity, optical is simplest - and it can handle up to 5.1 Dolby Digital soundtracks. But it doesn't have the bandwidth necessary to carry lossless Dolby TrueHD or DTS-HD Master Audio soundtracks.

HDMI does, although we wouldn’t expect an entirely faithful 5.1 sound from a soundbar. Yamaha’s YSP range of soundbars, which includes the five-star YSP-2700, come closest, as does the aforementioned Ambeo from Sennhieser.

Stereo is nice, but surround-sound is way better – especially if you’re after an immersive cinema experience in your own home.

A talented AV receiver and a mighty surround speaker package will deliver the scale, detail and immersion you want when watching your favourite films and shows. It’s the ultimate boost to your TV’s weedy sound.

Considering your Blu-rays, and Netflix, Amazon Prime Video and Apple TV+ streams, output 5.1 Dolby/DTS soundtracks as standard, it makes perfect sense to invest in a 5.1 surround system if you really want the best sound to complement your pictures. You can also expand to a 7.1-channel set-up, or full Dolby Atmos system with speakers in the ceiling at a later date if you want, too.

Yes, this is a costly option. And you’ll have to commit a lot of floor-space to kit and cables. There's some absolute rippers out there like the Dali Oberon 5 5.1 package, Q Acoustics 3050i 5.1 Cinema Pack and PMC Twenty5.23 5.1 but you don’t have to cash in your life’s savings to get a decent home cinema system started.

A good pair of headphones

Sometimes, getting better audio doesn’t mean turning the volume up to 11 or setting up huge speakers all around your room. Sometimes all it takes is a good pair of headphones. You might live with someone who doesn't much care for football or Fast & Furious movies.

If you have a decent pair of over-ear headphones, they most likely come with a 3m cable. That should be long enough to plug into the back of your TV (if not, you can get cable extenders).

But the convenience of wireless headphones can’t be understated. A lot of TV manufacturers (such as LG, Sony and Samsung) offer Bluetooth pairing from their TVs. They connect to your headphones just as they would with your smartphone.

Headphones, by their very design, offer a more intimate listening experience. It’s more personal, you might arguably hear more detail, and they're undoubtedly immersive - perfect for your Game of Thrones binge. Invest in a good Bluetooth pair, such as the Award-winning Sony WH-1000XM3, AKG N60NC Wireless or B&W PX7 wireless cans, and you'll be well on your way.