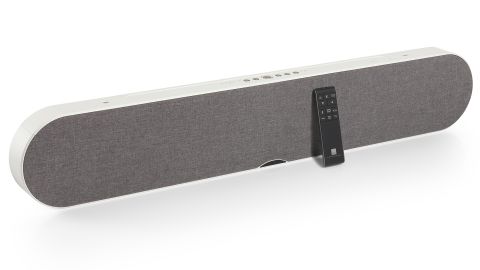 Great for music, even better for films, this tidy soundbar delivers all the sound your living room needs

Dali is not one to rest on its laurels, it seems. Despite Award-winning success with the Kubik One in the TV sound category at last year's What Hi-Fi? Awards, it has served up a second soundbar just in time for our 2019 talent show.

The Dali Katch One is a little less expensive than the Kubik One. It’s equally stylish, in a rather different way, and is intended to be a hub for all your living room audio needs.

With five different possible audio inputs, three ways to mount it and ten drivers all pulling together to fill your space with sound, we’re rather dying to see what Dali has learned from its first home cinema adventure.

But the first thing we notice is that there’s something wrong with the Dali Katch One – it’s too tall. The Danish company has crammed in four 9cm aluminium mid/bass drivers and four 11.5cm steel passive radiators inside the soundbar, and there are also two 21mm soft-dome high-frequency units here too.

That bodes well for its audio capabilities, but it means that the 17cm tall glass fibre-reinforced ABS cabinet gets in the way of your TV screen and consequently your TV remote sensor. While most soundbars try to be as unobtrusive as possible by staying well out of the way of your picture, the Katch One is a bit of a departure from the norm.

One solution, of course, is to wall mount it. There are some attractive leather straps included for that purpose, with some hidden fixings at the back if you prefer. On the plus side, if you do wall-mount it, the rear-firing drivers will end up positioned just right to make the most out of the bass generated. Another option is to wall mount your TV and use little wooden brackets for the Dali, again included in the package.

Height aside, the Katch One is a good looking soundbar. It’s oblong with rounded ends and it comes in a tastefully Scandinavian looking choice of Iron Black, Ivory White and Mountain White. The physical buttons for power, volume and source are all out of sight on the top. The ports are recessed on the rear to keep the cables as hidden as possible.

There’s no network connectivity or apps with the Katch One – this is pure audio – so HDMI ARC is likely to be your method of connection. This takes the audio straight from your TV and supports CEC so that you can still use your TV’s remote to change the volume. There’s a small Dali remote included in the box for more functionality.

Around the back, there are two optical ins should you wish to connect to your TV or add a music player. There’s also a 3.5mm aux-in and, although the USB port is for service only, it will support Google Chromecast Audio if you insert the dongle. Lastly, there’s Bluetooth 4.0 with aptX playback.

Inside, there are four 50W class D amps and, if the ten drivers aren’t sonically authoritative enough, then you’ll find a connection for an external sub-woofer on the rear. Those looking for Dolby Atmos, or any other kind of advanced audio decoding, should probably look elsewhere.

There are two sound settings on the Katch One, Wide and Focus. There’s no LED display and all the buttons and little halo lights are on top, so it is difficult to see from your viewing position which one is currently selected. Fortunately, it’s pretty clear from the audio as to which mode is switched on.

We fire up Hollywood disaster classic 2012 for some big home cinema bonanza, and the sound from the Dali is suitably earth-shattering. What strikes us first is the superb dynamic variation. This speaker can go from the intense quiet of the President breaking the news to his fellow heads of state that the world is about to end, to the huge drum beats in the soundtrack as the action kicks in, all without breaking a sweat.

Helicopters fly overhead across a broad soundstage that stays faithful to the action on the screen. The creaking of a house when the Big One hits California makes it feel as though you’re within its walls as the family tries to escape. Occasionally, a voice off to the side seems to come too loud, and out of nowhere in particular, but these moments are few and far between compared to all the great spatial ability that this soundbar has in its locker.

Dali recommends putting the Katch One next to a back wall, and there’s definitely a better quality to the sound both for detail and bass precision here. The thrum of a Learjet’s engine is solid and clean as Santa Monica collapses into the sea behind our fleeing protagonists.

The tinkle of splintering glass as downtown skyscrapers come crashing down is magic. The high notes have just a smidge of brightness to them at times – when the fireballs of molten rock pepper the ground in Yellowstone, for example – but for the most part, there’s nothing that jars across the frequencies.

For all the whizz-bangs, though, there’s still great clarity to voices throughout, and the soundtrack never swamps the dialogue. There’s an appealing nuance to vocal timbre too. There’s translatable emotion through the screen when we hear voices cracking with sorrow as they say their final goodbyes to loved ones over the phone.

Switching to Focus mode, we pop Let It Be by The Beatles into the player and find that the Katch One is almost as good for music as it is movies. There’s enough dynamically to get a sense of the individual voices of the backing choir at the beginning of the track. Likewise, there’s real character to the guitar solo.

Overall, there’s a warm tone to the sound, but the top end could be sweeter. Beats on the cymbals can be a touch tinny and even the high, sad brass echo in Let It Be is not quite as rich as it might be. By class standards though, these are minor complaints that pale next to everything the Katch One does so well.

Moving on to The Blend by The Herbalizer, and we get the real sense of the fun this soundbar can convey when used as a living room speaker. Just as with our film viewing, the bass has a well-defined bounce to it. It’s weighty but nicely contained with each hit, and just the length that it should be. The track zips along and it’s hard not to get sucked into listening to the whole album.

This soundbar will make a delightful addition to your TV set up. The crisp, dynamic audio is far beyond what you’ll get from your flat panel and this is sonically superior to all of its similarly priced rivals. Just make sure you’ve got the space and inclination to position it properly.

Read our Dali Kubik One review