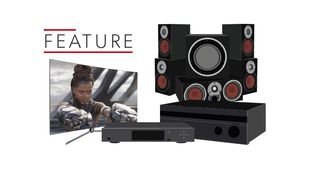 If you see your neighbours peeping out from behind the curtains as you’re carting this lot up your drive, don’t be surprised to find a for-sale sign on their lawn in the near future: a quiet night in will probably never be quite as quiet again.

Visuals first, then, and there’s no getting around the fact the Samsung Q7F looks unspectacular next to the super-slim panels of the OLED crowd, but that isn’t to say it’s not a smart-looking set in its own right.

The thin bezel leaves you feeling almost as if all you can see from the front is screen, and - at 45mm from front to back - it’s slim by the standards of backlit TVs.

It’s neat, uncluttered and stylish, and those are also traits of both Samsung’s current TV operating system and the sleek silver remote control with which you navigate it. In tandem, they create a slick, snappy user experience, and get you to the content you’re after quickly.

When it comes to content, there’s certainly plenty of it, with Netflix and Amazon taking centre-stage and the usual array of catch-up services ensuring you never need miss another episode of Love Island. Unlike many rivals, the Samsung also includes Now TV in the mix, giving you a route to Sky content without the need for a dish or contract.

Most impressive, though, is the picture this 4K TV emits. The biggest advantage an LCD TV with LED backlighting has over an OLED TV is brightness, so it’s little wonder this is the most striking difference between the Q7F and its best OLED competitors.

The picture almost shines, with extremely sharply defined details giving it incredible solidity and depth. This means blacks are made brighter than OLED equivalents as well, but the Q7F implements its backlight effectively - black tones aren’t sacrificed nearly as much as they are on many rival LCD sets, and there’s none of the clouding often associated with backlit TVs.

The Q7F certainly prioritises vibrancy and punch, but not at the expense of subtleties such as skin tones, which are surprising nuanced and nicely judged. Paired with the aforementioned levels of detail – individual hairs, different clothing materials and every crease in a shirt are brought to the fore by the crisp definition offered here – and you get a realistically natural-looking picture.

Though the Q7F does a superb job of upscaling content, there’s no doubt it works best in tandem with a superior 4K HDR source – for that, we’re suggesting Oppo’s UDP-203 Blu-ray player.

The UDP-203 will play 4K and Full HD Blu-rays (2D and 3D), DVDs and CDs, and even DVD-Audio and SACDs - it's as universal as disc players get these days. It also supports Dolby Vision HDR alongside the standard HDR10 format.

There are no streaming apps included, but when you are pretty much guaranteed these on your TV, you can’t really fault a Blu-ray player in this sense.

Importantly in this pairing, it matches the Q7F’s superb levels of detail and clarity, and feeds it with rich colours the display can really make pop.

Equally importantly, the UDP-203 digs a correspondingly crisply detailed, dynamic sound from your discs - so the audio really demands the full surround-sound treatment.

So you’ll need an amp. The Sony STR-DN1080 can play Dolby Atmos soundracks up to a 5.1.2 speaker configuration – it's the company’s first amp to embrace Atmos – and also supports the new DTS:X format. All six HDMI inputs at the back are HDCP 2.2 compliant too, supporting full playback of 4K HDR content.

Of course, it wouldn’t be a Sony product without some serious hi-res music support. The amp can play up to 24bit/192kHz files in all popular formats, and will also play native double DSD files across HDMI, USB and wi-fi.

The amp is further kitted out with the most popular streaming facilities – Bluetooth, AirPlay, Chromecast and Spotify Connect are all built into the STR-DN1080. The amp’s DLNA certification means you can play hi-res music files from any NAS device or laptop on the same network.

And let’s not forget multi-room: you can connect the amp to other compatible Sony products using the Music Center app to stream music around the house.

How does it sound? In a word, stunning. With a suitably talented set of speakers you’ll get tons of insight and precision, authoritative heft (delivered with surprising agility) and contouring dynamics.

Yes, upsizing to an amp and surround package is, in large part, about getting more muscle than a humble soundbar - but the Sony deals just as much in terms of subtlety as it does brute force, immersing its audience in morose docudrama just as it does whistles-and-bells blockbusters.

And when we talk about suitably talented speaker packages, Dali’s Zensor 1 5.1 is never far from our minds.

A multi-Award winner (twice as our traditional speaker packages Product of the Year), its detailed, punchy performance has yet to be bettered at this price.

In the package are two pairs of Dali Zensor 1 standmounters, former Award-winners in their own right that offer as immersive a stereo performance as they do with surround sound.

Accompanying them is the Zensor Vokal centre and the E-9F subwoofer. Together they run like clockwork, delivering arguably the most articulate and entertaining sound this money can buy.

Yes, getting overly familiar with the volume dial while driving this quartet might earn you a visit from the authorities, but at least you can bet they’re more likely to stay and watch the rest of the movie than pursue any of the noise complaints.

While many projector manufacturers over-compensate for projectors' inherent shortcomings with excessively lurid tones, this 4K Sony has a subtle, natural palette and yet is crisp and detailed. A no-brainer if you want to switch out that Samsung TV.

If you’re will to sacrifice some of the sonic authority of the Oppo, you can save a chunk on your 4K Blu-ray player with this HDR10-supporting Sony. It still sounds sweet, and will feed your TV or projector a detailed, vibrant picture.