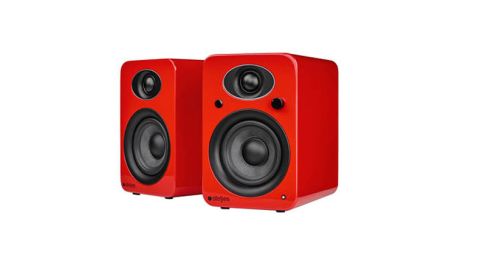 When you think of British design, what comes to mind? Red phone boxes? The London Underground map? The Mini, perhaps?

According to Steljes Audio, an audio division of the AV distributor, Steijes Ltd, you can add the NS3 desktop speakers – a “beautifully British design” – to that list. They certainly look good, but do they have the sound quality to match?

For a pair of relatively low-cost desktop speakers, Steljes Audio has made the NS3s surprisingly versatile. There’s a whole host of connections on the back of the left speaker, so you can feed in audio via a number of sources.

Use the NS3’s optical input to connect a television, plug your analogue music sources into the 3.5mm socket - there’s even a stereo RCA connection for other hi-fi kit.

There’s also a USB input, but unfortunately that’s only good for charging. It doesn’t support audio playback. For wireless connectivity, the left-hand NS3 has Bluetooth built-in and a dedicated pairing button on the remote control. That’s a useful addition - a specific control makes it easier to set the speakers up.

And speaking of the remote, this one is more useful than some found accompanying more expensive kit (like the Ruark MR1 mk2, for instance). The NS3 handset offers input selection, volume control and adjustment of bass and treble frequencies.

If there’s one thing the NS3s have going for them, it’s their sleek looks. As well as the Vermillion Red of our test sample, they also come in another six colours, including Lagoon Blue and Gun Metal Grey. They’re a hefty pair of speakers, weighing about 6kg in total, and are taller than many nominal rivals.

The glossy finish of the enclosure makes them look a lot more expensive than they actually are. The speakers comprise a 25mm soft dome tweeter and 10cm woven fibreglass driver. But a word of warning: there’s no grille covering the drivers, so you should keep these speakers out of the way of anything (or anyone) that might be tempted to prod or poke them.

We first heard these speakers at the start of 2017 and found them wanting - particularly in the upper frequencies - but since then Steljes Audio has made a number of changes to the design in an effort to improve sound quality.

The crossover has been recalibrated for better balance between the mid- and high frequency ranges, while the driver has a new, larger magnet moving it. The company has improved the motor system to make it more efficient, and the internal amp has also been tweaked.

And we have to admit, those changes do make the NS3s sound markedly improved, without diminishing the qualities that we enjoyed the first time we heard it.

For such a tidy product, the ability to dive down into the depth of the low-frequency range still impresses. The NS3s latch on to the earthy bass-line that makes Michael Jackson’s Smooth Criminal (taken from the 25th Anniversary edition of Bad) so iconic, dig deep into its root and emerge with a punchy, responsive sound.

They’re rhythmically impressive too, able to handle the balance between the slow, smooth opening notes of Old Friends from the soundtrack of The Hobbit: An Unexpected Journey as well as they can the speed and adventure in the strings midway through the piece.

Most important, though - for us, at least - is that the hard, bright treble that ultimately let these speakers down first time around has been addressed.

Previously it carried an abrasive quality that – while you might overlook it in small doses – became wearing over time. But now, having tried them out with some complex, rough electronic music like The Governor by Nicolas Jaar, we can safely say the treble’s much easier to listen to.

Near the end of the track there’s a cacophony of sounds - discordant brass notes played over buzzing that sounds like a swarm of drunken hornets – which the NS3s can now put across in a much more enjoyable way. That’s not to say that these speakers are perfect, however.

There are still areas we think could be improved. In an ideal world, we’d like a little more detail in the midrange – Michael Stipe singing Nightswimming has noticeable vibrato in his voice which the NS3s don’t do quite enough to reveal.

The overall presentation could be more cohesive, as these speakers don’t time as well as they might. The instruments sound individualised, rather than working towards a whole. It’s not a small thing - and it makes it a bit more challenging to get your foot tapping to the rhythm of the track.

For a desktop solution, the NS3 speakers certainly play their part well. They’re capable enough to work as your everyday speakers, and will look good while doing it.

If you’re looking for an entry-level way to get your workplace audio sounding better, these speakers are worth considering.