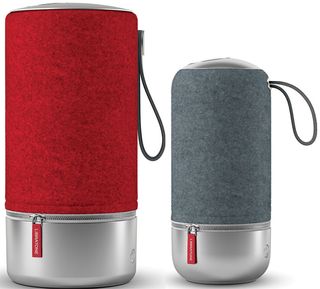 Libratone has launched a new Copenhagen Edition of the Zipp wireless speaker, which sports an aluminium base, leather handle and a soft wool cover - something we missed when the new Zipp speakers were launched last year.

Everything else about the speaker is the same as the regular edition, including 360-degree sound and multi-room capabilities.

The Copenhagen Edition is available from 15th February for £289, and the Zipp Mini Copenhagen for £249. Additional covers are available for £29 each.

B&O Play has announced it will bring Google Cast to all current and future network speakers, with current models getting the update by the end of Q1 2016.

Owners of Play speakers will be able to stream music from a wide range of services, including Spotify, Deezer and TuneIn.

"With Google Cast, you can enjoy music directly from the cloud instead of playing music from your device. This gives premium audio quality and ensures that incoming calls or texts do not disrupt the music listening experience," said Corporate VP of B&O Play, Henrik Taudorf Lorensen.

The update will be available for the BeoPlay A6 and second-gen BeoPlay A9. For more information, visit the B&O website.

The new company, Steljes Audio, has been formed as a division of Steljes Ltd, the AV company founded in 1987. It has launched nine products: a trio of powered stereo speaker systems; two soundbars; two radios; a streaming adapter and a stereo amplifier.

The stereo speaker systems comprise two desktop and one floor-standing model and connect to devices via Bluetooth.

The radios offer DAB/DAB+/FM tuners alongside Bluetooth and Spotify Connect on the SA60.

Atlas Cables has unveiled the Zeno headphone replacement cable. Designed to work with a range of headphones, it is claimed to deliver "a significant audio improvement over average quality cables supplied with even high-end headphones".

See all our Atlas Cables news and reviews

Nue World Ltd has introduced the Chord & Major Tonal earphones to the UK, which have been designed to complement different genres of music. The range is made up of five pairs: world; ballad; jazz; rock and classical, although Nue World claims the genre designation is “more about the presentation, rather than the type of music.”

Dynaudio has announced the start of construction on a new 17,200 sq ft research and development centre next to its headquarters in Skanderborg, Denmark. Building is expected to be completed by the end of 2016 and the new centre will be home to the company's expanding R&D team.

Lars Prisak, CEO said: "Expanding our physical space was naturally the next step. We have put our money where our mouth is with the new center, as it offers the optimal working conditions for our R&D department. This will secure that we always have top technologies."

See all our Dynaudio news and reviews