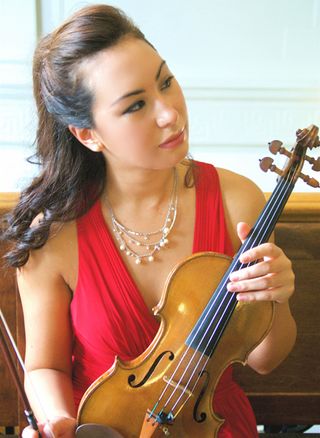 Headphone specialist Grado has appointed violnist Francesca Dardani, 24, as the company's 'ambassador' to the London 2012 Festival.

Francesca, a rising star in the music world, will perform in the Aldeburgh World Orchestra which comprises young musicians from 30 countries, and has been brought together for the Olympic Games.

The orchestra will perform a series of concerts as part of the London 2012 Festival, including a Proms performance at the Royal Albert Hall.

During the festival Francesca will keep a diary and post about her experiences with the orchestra on her Facebook page.

She was offered the ambassadorial role with Grado after contacting the company to say how much she loved her Grado RS2i headphones. "Their cool wooden finish reminds me of my violin," she says.

Grado has a pair of tickets for a performance of Shostakovich's Fifth Symphony at Snape on July 22nd which you can win by liking either her Facebook page or Grado's. The competition closes at midnight on July 16th.