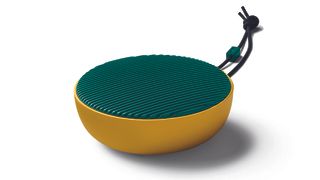 Danish audio brand Vifa has gained a reputation for its attractive, competitive-sounding wireless speakers, all of which are named after cities. We called its Reykjavik "a good choice" and the Helsinki "a stylish speaker with good sound [and a] Scandinavian je ne sais quoi".

The company's latest (and sixth overall) wireless speaker no doubt looks to build on that praise, but it does buck the trademark city naming... kind of. Simply called City, it's a portable Bluetooth speaker with plenty of selling points – a 360-degree sound, 12 hours of battery life from a single charge, and an attractive design available in six different colourways: Lemon, Stone Grey, Burgundy Blush, Sage Green, Terracotta Blue or Ultramarine Coral.

Committing to the practicalities of portable, the Vifa City weighs just 300g and sports an aluminium casing that's water and dust resistant to IPX4 standards. Inside is a 6.5cm woofer with aluminium cone and neodymium magnet, and a 1.5cm soft dome tweeter.

There's NFC for quick pairing, and for the most epic of picnics owners can pair up to four speakers over Bluetooth to provide a bigger sound, too. A USB port provides a playback alternative to Bluetooth.