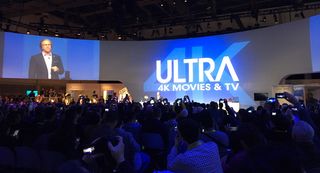 4K content finally became a reality in 2015 and it seems Sony wants to do its bit to get more 4K video in the wild this year.

It will launch in the US later this year and - surprise, surprise - there's no word on a UK release date as yet. There's also no word on whether it will come to non-Sony Android TVs, though Sony's suggestion that the app was 'optomised for Sony Android TVs' makes it seem unlikely.

A paid-for service, Ultra will allow you to buy 4K films directly on your TV and then sit back and enjoy all those extra pixels moments later, including 4K HDR content. At least that's the theory.

The service sounds not unlike the Sony 4K download service and 4K Media Players that arrived in the US in 2013... but have still yet to find their way to the UK.