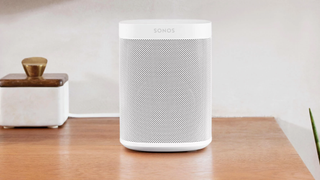 Sonos is suing Google for patent infringement. Sonos claims that Google infringed five of its patents, including one that lets wireless speakers sync with and communicate with each other.

As well as damages, Sonos is seeking a ban on Google speakers, smartphones and laptops in the US, reports The New York Times.

The firm claims that for years it has been dependent on Amazon and Google in order to make its speakers more appealing to consumers. Sonos now says both firms exploited that dependency to gain access to Sonos' intellectual property.

Amazon and Google now sell wireless smart speakers of their own (and a lot of them) that have similar features to Sonos speakers. But crucially, they cost a lot less, and carry the logos of established tech brands that appeal to mainstream consumers.

So how did Google exploit Sonos? Sonos claims that in order for Google to design its music service to be compatible with Sonos' speakers, it asked Sonos to hand over the blueprints to its speakers, which it duly did. Unsurprisingly, Sonos now sees this as a naive move on its part.

Sonos claims it has been forced to go to court.

"Google has been blatantly and knowingly copying our patented technology," Patrick Spence, Sonos' chief executive, said in a statement. "Despite our repeated and extensive efforts over the last few years, Google has not shown any willingness to work with us on a mutually beneficial solution. We’re left with no choice but to litigate."

Sonos says it is only suing Google and not Amazon because it couldn't handle facing both tech giants in court at once.

In response, Google said it had been discussing Sonos' intellectual property with Sonos for years, and it was disappointed Sonos had resorted to litigation. "We dispute these claims and will defend them vigorously," said Google spokesperson Jose Castaneda.

Amazon said that it too had done nothing wrong. "The Echo family of devices and our multi-room music technology were developed independently by Amazon," said Amazon spokesperson Natalie Hereth.

Sonos is suing Google in two federal court systems in the US: the Federal District Court in Los Angeles and the United States International Trade Commission, which has the power to block the import of goods it deems to violate patents.

While Sonos is only suing Google for violating five patents, it claims the actual number violated by Google and Amazon is closer to 100. It has not said how much it is seeking in damages.

Sonos is no stranger to such litigation, having sued and then reached an agreement with Denon back in 2018 over the company's HEOS range.