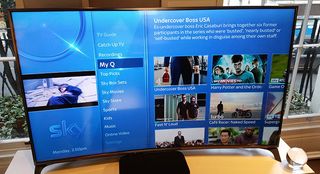 The new F1 deal sees Sky box-off live coverage of Formula 1 until 2024. And from the start of the 2017 F1 Championship season, every race will be shown in 4K, via the newly-launched Sky Q service.

Sky will launch its 4K content offering this summer, potentially around the start of the Premier League football season in August. It will only be available to Sky Q subscribers.

The new deal confirms the Sky Sports F1 channel as the place to see all live F1 races from 2019 to 2024, but also that some races will be made available to watch for free.

The soon-to-launch Sky Sports Mix channel, which promises to bring some of Sky's premium sports content to non-Sky Sports subscribers, will show "at least two other 'prime time' live races a season". The Formula 1 British Grand Prix and F1 highlights will also be shown on a "free-to-air" basis.

Sky has not confirmed whether it will launch a Sky 4K channel, or offer a range of on-demand Ultra HD programmes instead, but the company has repeatedly stated it wants to deliver the most comprehensive 4K content offering available.

Currently BT Sport Ultra HD is the only UK broadcast channel to deliver 4K pictures, showing live football and other sports at a rate of around one event per weekend.