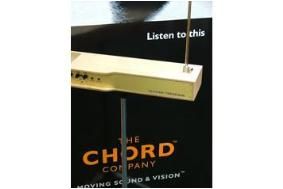 What's a Theremin, you ask? Well, according to Wikipedia, it's one of the earliest electronic musical instruments and is highly unusual in that it's played without being touched (see picture).

It was invented by Russian Leon Theremin in 1919. The controlling section usually consists of two metal antennae which sense the player's hands and control radio frequency oscillators for frequency with one hand, and volume with the other.

If that sounds too complicated, then you can use your ears instead to take the Chord Co headphone challenge. The company will offer visitors to the show the chance to hear the difference between a a patch cord RCA cable and Chord's own Crimson and Chameleon.

Still don't believe cables really make a difference to sound quality? Then put your own ears to the test.

And finally, you'll be able to see Chord's brand-new biwire version of its 2008 Award-winning Carnival Silver Screen which will sell for £11.90 per metre.