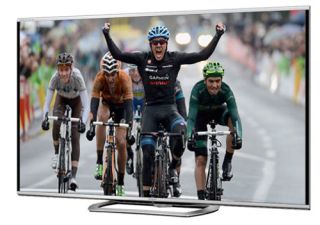 First revealed at CES in January, the Sharp TVs are set for a UK release this summer. There is no word on UK prices as yet but having been announced as $3999 and $6499 respectively in the US, whathifi.com has been told a whopping €5000 and €8000.

Sharp is no stranger to super-size TVs, releasing the LC-70LE741E last year and the 60in Sharp 4K TV, the LC60HQ10, earlier this year. There's no mention of 4K Ultra HD with these new TVs, however.

If you're worried about such a massive TV dominating your living room, then Wallpaper mode, which turns the TV in to a giant photo frame for images of your choice when the TV is in standby, might placate you a smidgeon.

Nevertheless, active-shutter 3D glasses are billed as optional extras, which seems a little bit tight on Sharp's part in our humble opinion. A camera for enabling Skype calls is also an option.