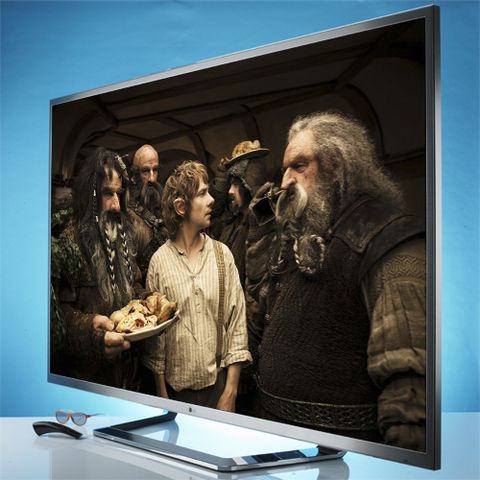 The 84LM960V is a mostly impressive set. It looks stunning with Ultra high-def signals, but more ordinary elsewhere. That price is hefty, too

This is one of only three Ultra HD sets we've had our hands on to review, the others being Sony's KD-84X9005 and the Toshiba 55ZL2. Its 84in 4K panel covers exactly four times the area of a 42in set, and would be right at home in a mansion, or boardroom.

That sky-high price is partly accounted for by the relatively low number of 84in sets produced, but we suspect most of the price premium over its 55in brother (yours for around £2000) is justified by the inclusion of a 4K panel: LED edge-lit, it has a resolution of 3840 x 2160 pixels.

As ever with such things, more is always better, at least most of the time – but here’s where things get tricky. While the highlight of this set is unquestionably its ultra-high-definition capability, the problem is source material – or rather the lack of it.

Aside from the odd high-end camcorder and a few video clips you can download, there's not much Ultra HD, or 4K, content out there. Indeed, every time we’ve reviewed an Ultra HD display we've had to rely on the manufacturer to supply the 4K footage, invariably stored on some sort of outboard computer.

LG supplied us with a number of clips on a hard drive, but they were pretty standard demonstration fare. You know the kind of thing: immaculately photographed landscapes, a bit of animation and shots packed with intricate detail.

In this case it was amazingly vibrant views of Paris and London by day and night, and hardly surprisingly the 84LM960V displayed them wonderfully.

With such high definition it’s amazing just how close you can sit to the screen without the experience being spoiled by picture noise, processing anomalies or even motion issues. And with pixels so small, you almost have to get right up to the screen before their structure becomes apparent.

In fact, LG recommends viewing distances should be halved compared to those suggested for a standard Full HD set (around 1.6 times the TV height rather than 3.2). It feels unnatural at first, but the viewing experience becomes really immersive when you get this close to the screen.

It’s all deeply impressive. We loved the crisply drawn edges, the sheer clarity of the image and the wonderful richness and subtlety of the colours. Admittedly, the LG’s colour rendition veered on the vivid side of neutral, but that could well be down to the source material rather than the screen.

Move onto Ultra-High-Def 3D and this TV continues to shine. As is LG’s way, this set uses passive 3D technology, with five pairs of glasses provided in a variety of frame colours (see below).

We’ve long felt the passive approach to 3D gives a more relaxed viewing experience, and so it proves again. The innate loss of resolution – it’s halved – has less obvious impact as the image is of such a high quality to start with.

Once again there were only a small number of short video clips with which to judge things, but we found the image stable and capable of showing pleasing depth. Any slight instability is relatively well handled, and the sheer scale of the image makes for a thrilling experience at times.

Still, we’re a cautious bunch here, and we’ll need access to more varied source material before drawing any firm conclusion as to just how good a 4K picture this LG produces.

Of course, more rivals would help with context too. For the time being we’re happy to say that in 3D the LG blows standard Full HD out of the water, and leave it at that.

Drop the resolution to Blu-ray and we’re pretty pleased with what this TV manages. No, it’s not the finest Full HD picture you’ll ever see, but considering the outlandish screen size and the amount of upscaling the set has to do – it makes up three out of four pixels – the results are good.

The Dark Knight Rises is a stern test with its brooding blacks and fast-moving action, and the 84LM960V responds well. Its picture looks clean and sharply etched while delivering strong contrast, with white looking suitable punchy, though they could do with a smidge more subtlety. Colour rendition remains on the vivid side without being overbearing.

However, motion proved the biggest hurdle. No matter how much we manipulated the LG’s processing, we could never quite strike the idea balanced between smoothness and overt blurring during scenes of rapid movement.

Go too far down the smoothness route and the picture takes on an unnaturally processed feel making everything looked like it was filmed on a poorly executed green screen background – but then if you don’t dial in enough processing, judder is painfully obvious. We ended up with an acceptable, though not perfect, compromise.

These slight motion issues aside this TV performs well with games too. Running Gran Turismo 5 from a Sony PS3 this LG delivered relatively lag-free responses, and its combination of rich colours and crisp detailing works well here.

And let’s not forget the sheer size of the screen, and the pleasure of playing a game where your whole field of view is taken up by the image. Lovely.

DVD replay? Don’t do it. With standard-definition signals this set just looks blurred and noisy – one of our test team was heard to say, “It looks just like VHS.” We’re similarly unimpressed with standard-def off-air broadcasts. It’s no surprise, considering the screen has to scale the image around 20 times.

However, switch to HD transmissions and this LG delivers decent pictures. Its image looks clear and nuanced, even with the garish colour palettes of daytime television.

Smart functionality is important, and this TV behaves no differently to other LG 960 series sets in this respect. Its Home menu is fairly well laid out and relatively easy to follow. It offers a good choice of apps including Lovefilm, Acetrax, Netflix, Blinkbox and Knowhow films, as well as BBC iPlayer.

Streaming HD from iPlayer – Dara O Briain’s Science Club, in case you wondered – was an enjoyable experience, and surprisingly watchable. The image’s noise levels are kept in check and the LG does a fine job with edge definition and, in general, skin tones. It’s all easy on the eye in a way that the standard definition stream isn’t.

Move away from picture performance and there’s much to recommend this TV. Unlike smaller TVs, the LG has a decent amount of space for drive units, and this set has what LG calls a '2.2 speakers' system.

Small speakers on the bottom edge of the TV handle the upper frequencies and a pair of larger drivers on the rear deliver the bass. It’s no real alternative to a proper surround set-up, but this combination does at least deliver a decently weighty and listenable sound.

As with other LG 960 series TVs there’s a pair of remote controls too. One is a conventional full-buttoned handset, of the kind you get with any TV; the other is a simpler, point and click unit that also doubles as a microphone for searching on the internet and so on.

As far as features are concerned LG is right up there in the leading pack, complete with Smart TV functionality.

There’s no denying this is a hugely capable set – and that 4K capability is stunning. But getting decent source material is likely to be an issue for years to come.

So we’re left with a huge screen that performs surprisingly well with Full HD signals and delivers a high standard of smart functionality and replay. And that means the LG 84LM960V is a massively desirable piece of kit, but not quite rounded enough to fully justify that huge price tag.

Four stars it is then.