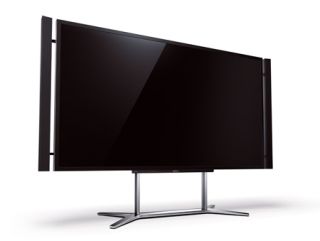 We had the chance to take a sneak peak during the recent IFA consumer electronics show in Berlin. Thankfully, Sony has been kind enough to lend us one of only two sets currently in the UK, so we can spend some quality time with the set and bring you our initial impressions in the form of a hands-on review.

Just to recap, the KD-84X9005 is due to be go on sale during the second week of December and you can be the proud owner of one if your bank balance or overdraft can stretch to the £25,000 price tag.

The sample we’re looking at is close to production quality, although we’ve been told a few tweaks are still being planned before it officially goes into production.

Sony provided us with a small selection of 4K content to check out: 3D trailers for The Amazing Spiderman, and the animated comedy, Hotel Transylvania. Sony also preloaded an external PC with purpose-made, longer 4K clips including some busy cityscapes shots and the Berlin Philharmonic Orchestra.

Sony has since announced that the US model of the TV will ship with the world's first 4k content delivery system, filled with native 4K content. We can only hope that the UK TV will come with 4K native video, too.

The Sony arrives in a VERY large packing crate!

And, looking at the 4K footage stored on the PC, we can’t help but hope 4K goes mainstream sooner rather than later.

Viewed from just over 4m from the screen, the picture appears hugely impressive. Clairty, detail and definition all appear startlingly good. We moved in for a closer look (standing around 1.5m away) and still couldn’t see any pixels or blocking.

We just managed to squeeze it into our test room

This model is the first Sony one in the UK to use passive 3D tech (passive screens are already available in Japan). The glasses are lightweight and look reasonably stylish with subtle Sony branding along either arm.

They seem a pretty comfortable fit too, and appeared to fit over a pair of normal glasses without any trouble. As the TV is 4K but uses passive 3D tech, the actual resolution of the overall image is halved, which means what you’re actually seeing is half 4K (3840 x 2160) i.e 1080p resolution.

Pictures appeared very impressive. Watching the Spiderman clip the texture and sheen on the Spideysuit seemed extremely realistic. The colourful CGI of Hotel Transylvania seemed to suit the Sony too, with a good sense of depth.

Next, we jumped to a normal 2D Blu-ray. Bond is almost back with the imminent release of Skyfall, so we reached for a copy of Casino Royale to get us in the mood.

The chase scene through the construction site can be a bit of a blur on standard Full HD screens, never mind a TV forced to upscale from 1080p to 4K resolution.

But the Sony seemed to handle it with only the slightest hint of flicker. The company’s Motionflow technology is one of the best we’ve experienced so we hope the final production sample is up to scratch.

Fully installed and ready to roll

High-def content is always going to favour a HD TV, so to put the Sony under some pressure we fed it a standard-definition DVD. But even upscaling the disc's native 576i resolution to 4K the Sony doesn’t seem to struggle.

As you’d probably expect, the general image appeared a little soft, but it didn’t irk us during prolonged viewing. Chances are if you’re lucky enough to be in the market for one of these, then SD content will be the last thing on the menu. And so it should be.

The Sony in action

Instead of trying to squeeze sound out of the frame, the Sony KD-84X9005 comes with detachable speakers. They fit along the left and right edges of the screen and each one holds five drive units.

It’s not the most subtle or stylish solution, but given the poor level of sound we’ve come to expect from flatscreens, the Sony sounds very promising indeed. They produce a decent amount of weight, so fingers crossed.

Tomorrow we’ll bring you part two of this in-depth hands-on where we’ll be taking a look the Sony’s off-air performance, smart functionality and how it handles gaming.

OK, I’ve spent another day in the company of this 84in beast and I’ve thrown Freeview HD, internet content and gaming in its direction. Here are a few more observations before it’s sent packing…

The UK verison of this set sports a Freeview HD tuner as standard. And, given the lowly resolution of your average standard-def channel, the Sony seems to cope extremely well.

I’m not sure what it says about my lunchtime viewing habits, but Loose Women didn’t appear too grainy or weathered (although the same can’t be said for the presenters).

The jump to ITV1 HD appeared to bring with it the usual benefits in terms of clarity and resolution. Moving nearer the screen for a closer look, we liked the way the picture seems to keep its composure.

There’s a good chance any potential owners will connect one of these to the likes of Virgin’s TiVo box or the Sky+ HD service, but it’s nice to know the picture seems to be perfectly watchable if you don’t.

In the interests of fairness I hooked up a PlayStation 3 and an Xbox 360 Slim to see how the Sony shapes up. I’m more used to gaming on screens half the size so I was intrigued to see how the likes of Call Of Duty, Modern Warfare 3 (COD MW3) and Gran Turismo 5 would look scaled up to 4K.

So, I switched the TV to ‘Game’ mode through the menus and reached for a controller…

COD appears very impressive, again the Sony doesn’t seem to have any trouble upscaling content to match its resolution. The cut scenes appeared suitably film-like and the action was intense to say the least.

There appeared to be some flicker and blocking along the edges of weapons from the first person perspective, and the high-rise skyscrapers of New York City appeared to flicker a little, but the effects was nothing above and beyond what you’d see on smaller screen.

Lag time seemed minimal at worse. The game’s cut scenes give more opportunity to see a completely black screen and I did notice it highlighted patchy areas where the backlight appeared to be intruding ever so slightly.

Trying two player spit-screen of Gran Turismo 5 was enjoyable enough – having the larger screen estate means it doesn’t appear to feel as cramped or claustrophobic as when playing on a smaller TV.

We liked the look of the game in 2D, but the 3D didn’t seem quite as inviting. We think this is more down to the fact that PS3 games are limited to 720p in 3D, so on a passive 3D system the resolution is being halved again.

The Sony KD-84X9005 gets the smart treatment of Sony’s other ranges. Apps such as BBC’s iPlayer and 4oD are all accessible from the menus. The layout doesn’t have the smart tile-based appearance you get with the company’s HX range of sets, but Sony assure us this will be available with the finished production samples.

Considering it was being beamed over the internet it seemed more than watchable and there seemed to be minimal noise and judder which we’ve seen when using iPlayer on some smaller screens.

So that’s it, we’d better start boxing it back up as this screen’s going to be taking pride of place in Harrods over the next few weeks. We’re not sure if we’ll ever see a full production sample, but the initial signs look very promising. Good news for those with £25,000 to spare!

Is 4K going to succeed where 3D has failed in revitalising the worldwide TV industry? Consulting Editor Andrew Everard has his doubts...