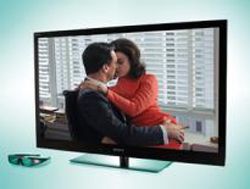 A spokesperson for Sony UK told whathifi.com: "We have no current plans to launch passive type 3D TVs outside China."

Panasonic made similar denials last year, before announcing at its 2012 European press launch last month that it would after all enter the passive 3D TV market with its XT50 range of plasmas.

Sony has begun shipping passive 3D TVs to China, and on a recent trip to the firm's Tokyo HQ there was much speculation that passive 3D sets might eventually find their way into other markets.

Research by the Japanese electronics giant found that its customers rated 3D technology much lower down the list of reasons for buying a TV than it expected, as we reported in our Sony TV strategy blog.

This took Sony executives by surprise, and we wouldn't be massively surprised if Sony does a similar U-turn to Panasonic in the not-too-distant future to kick-start the struggling 3D TV market.