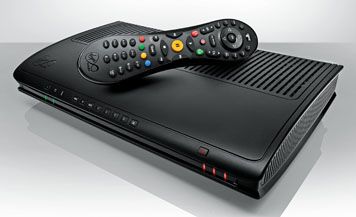 TiVo technology has been a big hit in the US, where it launched in 1999, but it’s had a more chequered history in the UK. This time, though, TiVo is convinced its deal with Virgin Media will be a success.

To get the new box you’ll have to pay an ‘activation fee’ of £200 (£150 to existing Virgin customers), plus a £40 installation charge, then an additional £3/month over the norm for the XL TiVo package.

This brings you more than 160 TV channels, three tuners (Sky+ HD has two) and 4600 hours of TV, music and movies on demand.

A big hard drive for plenty of HD content
The box itself is a Cisco CT8685DVB. The system has a built-in dedicated 10Mbps cable modem, so it won’t affect a separate Virgin broadband feed, and it provides TV in standard definition, HD and 3D.

So what does the new TiVo box offer? Well for starters it has a 1TB hard drive rather than the 160GB on the old V+ box, which was forever fast filling up with HD programming.

That shouldn’t be a problem on the new box; it can store up to 100 hours of HD content, or 400 hours standard-def.

There’s also a slicker implementation of BBC iPlayer, and a limited number of apps for the likes of YouTube, eBay and Twitter so you can access your accounts via the TV – once you’ve set them up online. More apps are promised in the future.

Also on the menu is 3D, although at this point the amount of material is mainly limited to some short demo clips and nine free films for those with the XL package.

If you’re prepared to pay for your 3D fix, there were eight on-demand films at the time of writing, including Saw: The Final Chapter, Despicable Me and Jackass. Prices range from £3.99 to £6.49 per film.

Better choice of HD channels
As for high-definition programming, there’s certainly a lot more than Virgin used to offer (XL customers get 19 HD channels, with the option of a further 12), but it’s still way off Sky’s 50+ dedicated HD channels.

But the biggest improvement is the TiVo technology. The box uses smart technology to record shows it thinks you might like. You can help it decide by using the thumbs-up/thumbs-down buttons on the remote.

Press thumbs-up three times and it will record similar types of programme; give a programme three thumbs down and it will know not to record that type of broadcast.

Automatic recordings are stored in your Suggestions list; after a couple of days, TiVo had recorded 28 unplanned shows for us, including Peep Show, 10 O’Clock Live, Heroes, Gavin and Stacey, The Gadget Show and The Event.

Of course, you can set recordings manually or using the series record link in the normal way too.

Effective programme suggestions
Choose a programme to record yourself and the device will come up with further ‘If you like this…’ suggestions.

We set Silk to series record on BBC One and it suggested Waking the Dead and Monroe as other shows we might like. Not a bad match.

As with Sky+, you can also set recordings from your PC or smartphone via Virgin’s online TV guide, provided your TiVo box is switched on.

The search function on the electronic programme guide (EPG) is also vastly improved over the old V+ box. You can search by show, theme, director or actor; you can create a wishlist of shows to be recorded when they become available.

And it will even include relevant material on YouTube in its search results.

Even better, the catch-up services allow viewers to scroll back up to seven days, making it a simple extension of live TV viewing. And if you see a ‘C’ symbol next to a programme on the EPG it means other episodes are available on catch-up TV.

Of course, all this clever technology would be pointless if the sound and picture quality weren’t up to scratch.

Excellent picture and sound quality
But we’ve been running our TiVo box for a month now, and picture quality in both standard def and HD is excellent.

As for sound, when Dolby Digital 5.1 soundtracks are available, a little Dolby symbol will appear on the info bar and you can send the multichannel signal to your surround amp via HDMI.

The Event on C4 HD looked splendid on our Samsung UE46D8000 TV with inky blacks and excellent contrast, and the DD 5.1 soundtrack had plenty of impact.

Switching to Virgin 3D, we rented the 3D version of Despicable Me and it looked good when viewed through the active-shutter glasses, with a stable image and reasonable 3D depth, although there was a slight lack of focus during fast-moving scenes.

Relative paucity of 3D content available
However, there’s no escaping the fact that Virgin doesn’t offer anything like the amount of 3D content Sky does. If broadcast 3D is your priority, Sky’s a better bet.

But that’s not to write off TiVo: it’s an immensely clever piece of technology, and if you’re prepared to spend time getting to grips with it, you’ll be amply rewarded.

Cost is an issue, of course, but then this is clearly a premium product. If Virgin ramps up the amount of 3D and HD content, it could give Sky a serious run for its money.