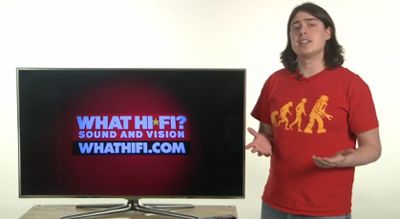 Lovely to own and to watch, but made to look a tiny bit overpriced

The TV market is a volatile one – as we all know. When we originally tested this UE46D8000 we gave a price of £1800, which was correct at the time.

By the time of this review, though, we’re struggling to find the Samsung for less than £1900 – and it’s closer to £2000 in some more optimistic retailers.

A beautiful, well-built TV
One thing that hasn’t changed is just how able and desirable a TV the D8000 is. Entirely admirable where build, finish and looks are concerned, it’s the closest thing to a frameless TV we’ve seen so far – and it’s light enough to make wall-mounting a viable option even on partition walls.

Its Smart Hub online functionality is a work in progress (the BBC iPlayer we were assured would be in place by now is still another month away, it seems), but it’s already an ergonomic triumph.

The on-screen interface is bright and logical, the ‘search all’ facility allows the TV to check for content across your apps, DLNA sources and local storage, and the schedule manager allows you to arrange recordings to a hard-disk drive attached to one of the screen’s three USB inputs.

Picture quality from the on-demand services currently available is on a broad par with standard-definition TV broadcasts.

When receiving TV signals (whether standard- or high-definition), the D8000 is fractionally inferior to the UE46D7000 when it comes to drawing edges, and it’s slightly less capable at suppressing picture noise.

It’s more than a match for the 'D7000 when dealing with complex patterns, though. These are marginal differences – so slight that we would put them down to batch variance.

The motion-processing options within the Samsung’s excellent on-screen menus require your full investigation, but the 'D8000 is capable of locking solidly to movement and from there it’s difficult to shake.

Our original test suggested the Samsung’s 3D performance was “easier to watch than last-generation models, thanks to a generally more stable image” and even in the light of the LG 47LW650T’s fuss-free ‘passive’ performance that remains the case.

With just one pair of 3D glasses included in the price, though, and with additional pairs costing anything from £80 (for battery-powered) up to £160 (premium, lightweight, rechargeable) there’s additional outlay on the cards for anyone but the entirely friendless.

So where’s the fifth star gone, then?
Nothing about this TV has changed in a month, then, bar the price (a bit) and its star rating (more significantly).

But the reason for that is simple. For all of its visual allure, we’re struggling to imagine anyone thinking this set is worth the extra £200 over its every-bit-as-capable UE46D7000 sibling.

Far better to buy the D7000, spend the money on some more 3D glasses and invite a friend round.