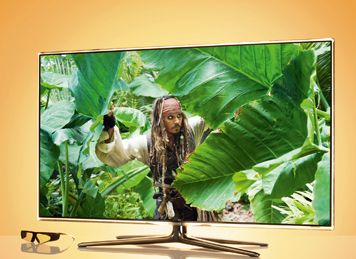 A potent combination of looks and performance, the UE46D7000 is our new favourite Samsung

Hard on its heels comes this, the UE46D7000. Don’t let the model number fool you – it comes from lower down the Samsung pecking order, but we think it’s an even more persuasive option than the D8000.

That swish, clear Perspex bezel is a sight narrower than any other manufacturer can currently manage – the result is a 46in screen that occupies no more space than most competitors’ 42in models.

It’s a really attractive showroom proposition – if these things were sold on looks alone, Samsung would be leading the field regardless.

The similarities between the Samsung models are even more pronounced when you compare specifications.

We’ll go further; they’re identical. So the D7000 offers everything you could reasonably demand: Freesat and Freeview HD TV reception, built-in wi-fi for painless access to a plethora of Smart Hub (Samsung’s name for its online platform, discussed at more length overleaf) options, ‘active’ 3D technology and a pair of powered 3D glasses in the box.

The remote is prosaic but useable (plus it has a ‘Social’ button, which can be exciting) , and on-screen menus are crisp.

Given the convergence of their respective specifications, we expected to see a lot of similarities between the way this UE46D7000 performed compared with its more expensive sibling, and that turns out to be the case.

Smooth and detailed reception
The Samsung’s high-definition TV reception (from Freesat or Freeview) is smooth, detailed and high-contrast – although the D7000’s super-slim profile makes attaching a screw-in Freesat aerial an absolute swine – and the D7000 is similarly adept at upscaling DVD pictures.

There’s a smattering of picture noise in extremis, but with motion stability and low-light detail the D7000 is fully competitive.

We reckon the screen is a little darker than that of the UE46D8000 when idling, too (despite our THX Blu-ray set-up disc indicating the screens should be set up nigh-on identically).

But when viewing 2D Blu-ray pictures, the D7000’s fearsome combination of unshakeable stability, extravagant detail levels and colourful, high-contrast picture-making is indistinguishable from that of its more expensive colleague.

It has the same admirable stability in 3D, too, the same nuanced, extensive colour palette and the same immersive, involving quality that makes it a compelling watch.

Why go up the model range?
So by now it’s clear the UE46D7000 is a formidable TV with talent to burn.

The price difference between it and the LG 47LW650T makes us feel the LG represents even better value, but if you’re in the market for a premium product that features premium looks alongside premium performance, the D7000 is the TV for you.