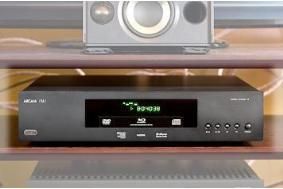 The £1000 player had originally been due on sale in August, but has suffered several delays in its development. An optional 3D upgrade will be offered next year.

Our photographer is busy snapping away in the Arcam room right now, so we'll bring you more pictures of the player in our show picture blog later today.

And if you can make it to the Manchester Home Entertainment Show this weekend you can save a whopping £555 on the FMJ BDP100 Blu-ray player when bought with its AVR500 multichannel receiver, normally £3554.90 together but available at the show for £2999.95.

This and many more hot deals are available for this weekend only. Check out our news story for more big hi-fi and home cinema savings.

Part of the FMJ range, and available in either black or silver, the player is Arcam's first foray into Blu-ray, and it's planned that an optional 3D upgrade path will be offered next year.

But most of all Arcam claims the BDP100 is designed to get the best from CDs as well as Blu-ray and DVD software.

It uses high-quality 24-bit digital-to-analogue conversion from Wolfson, coupled with a linear phase Bessel filter, and high-precision re-clocking of data from the main decoder, resulting in reduced jitter.