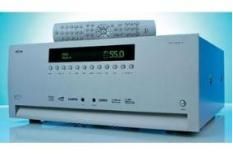 A fine amplifier for some, but not the best value for money in this class; consider what you really need before you commit to buy

Modern AV amplifiers have become difficult to write about: they do so much and offer their users so many choices that often it's hard to focus on what counts most for your cash – how they sound.

Arcam's AVR500 makes life a little easier. Even by the standards set by the best of the modern £500 pack, its list of features is comparatively spartan.

When compared to the all-singing, all-dancing affairs available at similar pricepoints,it's positively threadbare.

But in fairness to Arcam, that's exactly the intention with this design. Essentially, the AVR500 is a cut-down AVR600, the £3500 amplifier that has long claimed a place in our hearts.

The new '500 saves a hefty £1000 over its big brother by omitting DAB and internet radio (they're now optional), plus a few older-standard audio/video inputs and multichannel preouts: it's also less powerful.

However, a microphone-based auto-calibration system is included, to our surprise – in the past, Arcam has been opposed to such novelties.

Stripped for action
So, depending on how charitable you are, the '500 is either an economy special or a purist version that bins the bits you don't really need but preserves the stuff that matters.

What hasn't changed, much to our delight, is the Arcam's even tonality, deft effects steering and detailed, articulate presentation. Listening in both stereo and multichannel, it's a delight: spacious, detailed, rigorously attentive to delicate surround effects and vocal inflections.

Stereo imaging is excellent, rhythms flow naturally and you'll uncover a mass of hitherto-unheard detail from dense film soundtracks: even the half-shouted dialogue competing with the bludgeoning din of Transformers: Revenge Of The Fallen becomes intelligible. More's the pity.

However, the AVR500 does sound a shade less assured than its pricier sibling: while a reduction from 120w to 100w per channel seems modest on paper, it's clearly audible in practice.

Lacks authority and grip
The Arcam never sounds like it's struggling, but it lacks the absolute authority and martial grip of the AVR600. Try the battering dynamics in The Dark Knight or The Chemical Brothers' fearsome Escape Velocity as examples.

Of course, absolute volume and scale may not be the first items on your home cinema checklist: if that's the case, the AVR500's sweet nature and rhythmic stereo sound are powerful attractions.

They're enough to make the AVR500 a fine choice for music lovers with a movie bent. But at £2500, the Arcam's cheaper rivals offer stern competition, both sonically and, yes, in terms of features.

As an example, Arcam says a 3D-capable HDMI input board will be offered as an extra-cost upgrade for this model next year: fine, but most rivals give you that now, and more.

And that's the Arcam's Achilles' heel: it's good, but it's not complete enough to be truly great value.