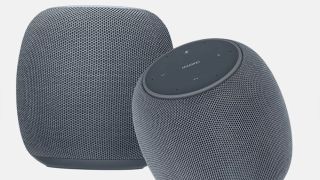 At its Mate 20 smartphone event in Shanghai, China today, Huawei has revealed its forthcoming smart speaker, as reported by Engadget (via Engadget China).

The elephant that must have been in the room: its aesthetic likeness to the Apple HomePod, with its slightly squashed cylindrical form and top-panel controls.

Smart speaker hunters on a budget will be pleased to know it’s about a sixth of the price of the Apple rival, though. The report states the ‘Huawei AI speaker’ (the translation of its Chinese name) costs 399 yuan, which is equivalent to under £50.

Perhaps surprisingly, Dynaudio has reportedly had a hand in the acoustic design, which looks to be built around 2.25in drivers and two passive bass radiators from a hardware point of view.

Rather than base the speaker on a third-party smart platform like Amazon Alexa or Google Assistant, the voice control smarts are instead provided by Huawei's ‘Xiaoyi’ voice assistant.

Further technical details are slim, and information about a global rollout is even slimmer. We hope to have more information soon.

MORE: Smart speakers: everything you need to know