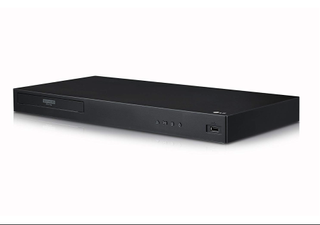 Prime Day comes but once a year. Deals like this LG Blu-ray player, however, come but once in a blue moon.

LG UBK80 4K HDR Blu-ray player £75 on Amazon
With 4K upscaling, Bluetooth, High Dynamic Range and a serious saving to boot, this is possibly the best audio-visual deal we've seen on Prime Day. Buy LG's 4K UHD Blu-ray player today on Amazon, and you'll save an outrageous £125. You'll have to hurry though – Prime Day deals like these don't stick around for long...

This incredibly cheap disc spinner offers HDR technology and Bluetooth, for access to immediate entertainment like Netflix, YouTube and more. You could soon be streaming 4K Ultra HD shows on demand, simply by logging in to Amazon and saving a packet on a 4K Blu-ray player.

The LG will also lift your standard definition content to near 4K quality via LG's 4K upscaler. If you prefer wiring in to the mainframe, connect your 4K Ultra HD HDR Blu-ray player to the world wide web via Ethernet.

Sorted yourself out for a Blu-ray player but on the market for a 4K TV to hook it up to? We've got you. Our 6 best 4K TV deals on Amazon Prime Day sorts the wheat from the chaff so you don't have to.