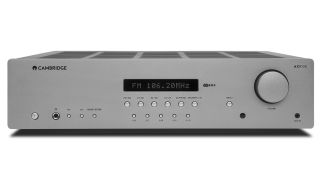 Going by price points, the AX series will slot in between Cambridge’s entry-level Topaz and midrange CX component ranges.

The AXA25 (£229) and AXA35 (£299) integrated amps deliver power outputs of 25 watts and 35 watts respectively, and both feature four RCA inputs, a 3.5mm front-panel input, a RCA recording output, and a USB port that can accommodate an external Bluetooth receiver for those wishing to add wireless streaming.

The AXA35 offers extra versatility through its phono stage input and 6.3mm headphone output, comes boxed with a remote control, and sports a display screen. Both AXA amps will be available from mid-June.

The AXC25 (£229) and AXC35 (£299) CD players, meanwhile, feature single RCA outputs and remote controls, support playback of even CD-R, CD-RW and CD-ROM discs, and will be available mid-June. The AXC35 justifies its £70 premium with an internal DAC feeding a coaxial digital output.

Last but not least are the AXR85 (£349, pictured above) and AXR100 (£449, pictured top) stereo receivers, which follow their siblings with a July launch date.

Naturally for a receiver, the 85-watt AXR85 has FM/AM tuners, which is bolstered by a built-in Bluetooth receiver, three analogue RCA inputs, a phono stage and a 3.5mm aux input. Recording, subwoofer and 6.3mm headphone outputs are correct and present too. More uniquely at this price, the AXR85 boasts two zones for driving two pairs of speakers simultaneously.

The AXR100 mostly mirrors its brother's spec sheet, building on it with a 100-watt output as well as twin optical and single coaxial inputs.