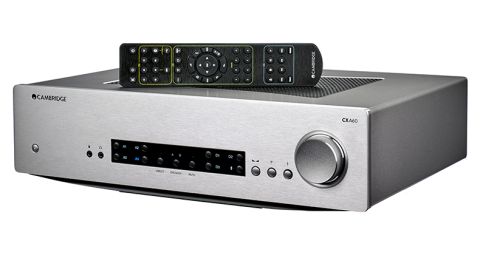 Last year, Cambridge Audio’s mid-ranging CX Series arrived with a figurative bang, and our affection for it hasn’t wavered since – not least for the jewel in its crown: the £500 CXA60 integrated stereo amplifier.

As implied by its most recent achievement – being named Product of the Year for the second year running – it remains the best value model on the market… even following the arrival of the five-star Marantz PM6006 (£400).

It’s certainly one of the classiest-looking mid-range models we’ve come across.

It’s clear Cambridge Audio has given plenty of thought to every aspect of the design; rather than settle for a bland box that it could well get away with at this modest price, the company has made it look and feel every bit a high quality product.

Looking at its sleek ‘floating chassis’ design and clean, uncluttered fascia next to the more traditional dial-heavy Marantz PM6006 will no doubt split opinion.

Whichever you prefer, this Cambridge Audio amplifier makes a great first impression – not least with its simple, elegant display, satisfyingly smooth volume, balance and tonal dials and blue coloured buttons, which click satisfyingly and are indicative of the Cambridge’s seamless operation.

Even the sturdy remote, compatible across the CX range, has a well-thought out design.

But the CXA60 isn’t just a pretty face. In fact, where it excels is in its complete sound, high-resolution audio support and impressive set of connections.

aptX Bluetooth is an optional upgrade by way of a £70 dongle, but going wireless (and spending extra to do so) isn’t necessary.

Connections-wise, the Cambridge and Marantz offerings are very similar, even in their joint omission of a USB input for plugging in a laptop or external hard-drive. Those with one high up their wishlist will have to look up the range to the CXA80 (£750) instead.

There’s scope to use the CXA60 as a preamplifier, and to plug in a subwoofer if you want to extend the low-end heft of its performance, and two speaker terminals mean you can bi-wire or run a second pair of speakers.

Just a single listen will tell you how entertaining this Cambridge Audio amplifier is. Fluid, snappy and packed with enthusiasm, it puts musical enjoyment high on its list of priorities.

That doesn’t mean it leaves things like detail, dynamics and rhythmic precision trailing behind – the amplifier skillfully handles complex arrangements and is capable of delivering subtle, accurate detail.

Stream The White Stripes’ Seven Nation Army and that iconic bassline is bouncy, rumbling and has just the right amount of tautness to keep your foot tapping firmly to the floor.

The whine and crunch of the guitar riff sounds textured and has plenty of bite, while the edgy, ragged nature of Jack White’s voice is deftly conveyed.

You don’t have to strain particularly hard to hear where the Cambridge justifies its extra outlay over the Marantz PM6006; there’s not only more meat and power behind the screeching guitar solo when it comes in, but greater dynamic variation to it too.

It’s able to tie together the drubbing bassline with the thumping drum and vocal more convincingly, and the Cambridge amp sounds more enamored with the track’s inherently attacking nature.

Thankfully, its energetic performance doesn’t cross the line into unruly, overzealous territory, the Cambridge is disciplined enough to exercise plenty of control when it comes to dynamics and rhythms.

Hans Zimmer’s compositions for Inception are appropriately brooding; the tension is maintained throughout, courtesy of expressive slow-building dynamics, and plenty of low-end weight captures their somberness.

The dying piano notes at the end of the track have plenty of space to breathe in the open soundstage, sounding poignant and arresting.

The Direct mode feature is worth pursuing, as it blocks any sonic degradation from the tone controls and aims to deliver the purest sound possible.

Delivering in every aspect (apart from a USB input), the CXA60 remains the most exciting-sounding and competitively-featured package out there.

It looks smart, has a wide spread of connections, and delivers a solid, competitive sound that manages to be exciting and easy to listen to in equal measure.

Got as much as £500 to spend on a new amplifier? You won’t go far wrong by investing it here.