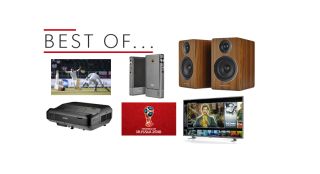 This week, it's the beginning of the 2018 World Cup in Russia!

But, if you're not a football fan, you'll be glad to hear that Dolby and Odeon Cinemas have teamed up to launch seven Dolby Cinema sites.

Sky will broadcast the England cricket team's matches in 4K and TEAC has added MQA support to a couple of its network players.

Dolby and the Odeon Cinemas Group are to open seven Dolby Cinema sites across the UK.

These cinemas are set to launch over the next few years, and will showcase Dolby's Vision HDR and Atmos technologies.

There's no word on where they'll be located or how much a ticket will cost, but it looks as though Dolby is about to expand its reach.

MORE: Dolby and Odeon to launch Dolby Cinemas in the UK

Sky is boosting its range of 4K content with coverage of England's One Day Internationals and Twenty20 matches in the format.

Matches will be broadcast exclusively in Ultra HD, starting with England vs Australia at the KIA Oval in June and finishing with England against India at Headingley in July.

You will of course need a 4K TV and Sky Q 2TB box to enjoy the cricket in 4K.

The NR-7CD requires a network connection to automatically receive its firmware update.

However, the process for the NT-505 is a little more complicated. Its System firmware needs updating to v1.10, and its Network firmware to the V10.3c version by the owner.

The complete What Hi-Fi? guide to World Cup 2018

Philips 4K TVs have been impressive, and the 50PUS6703 is another confident effort.

It delivers a dynamic, insightful and nuanced image for a reasonable TV. It's a set that's great with detail and offers a good suite of apps.

However, the user interface is dull and it's a tricky unit to set-up. Add an Amazon Prime Video app without HDR and there are a few missed opportunities.

But don't let that take anything away from what it does well. Despite a few small flaws, it's a great set for the money.

We've been testing 4K projectors of late, but this Epson marks a welcome return to the Full HD market.

It's a short throw projector, meaning it can be placed extremely close to the screen (or wall) when projecting images.

And it's a fine effort, serving up a crisp image with punchy, bright colours and good fine detail.

For the price, you may be able to find a better image, but probably not a projector as convenient as this.

The Q5 differs from Fiio's most recent offerings in that it's a DAC/headphone amp effort.

The Q5's sound is posed and balanced, but it lacks a little in terms of dynamics.

Nevertheless, it's a good effort in a market where you're spoiled for choice.

Acoustic Energy's AE100 belts out an enthusiastic sound that belies its ordinary aesthetic.

The performance is balanced and agile, it's good with timing and delivers a clear, solid and driving sound.

These aren't the most refined or transparent of performers, but they deliver a fun time nonetheless.

It's an energetic, dynamic and detailed performer. Both attractive and convenient in terms of design, it's happy to be used in stereo formation.

There are a few flaws. There's a slight coarseness to the treble, the bass is a little soft and centre and the surrounds aren't the best match for the S 805's talents.