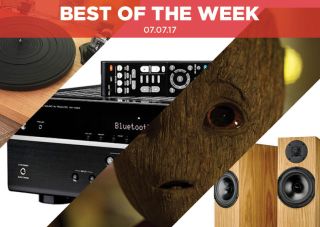 This week, James Gunn, director of Guardians of the Galaxy, revealed that Disney is to enter the 4K Blu-ray game, Loewe announced an OLED TV and Roberts revealed a range of new products, including three new radios and the company's second turntable.

This week marks the release of the August issue of What Hi-Fi?. Inside you'll find a feature on the differences between QLED and OLED, a 4K TV face-off between LG, Panasonic, Samsung and Sony, and a review of JVC's monster 4K projector, the DLA-Z1.

After months of rumours, Disney has finally decided to enter the 4K Blu-ray market.

Director James Gunn has jumped the proverbial gun by announcing that his Guardians of the Galaxy Vol.2 is coming to the format at the end of August.

The announcement is likely to pave the way for more Disney titles to be released, with reports suggesting that Pirates 5 could be the next to follow in September.

Loewe has announced its Bild 5 OLED TV and it comes with HDR and Dolby Vision.

It comes in two finishes and at just 4mm is improbably slim. It also boasts a 5.1 multi-channel decoder and digital audio link that makes adding speakers and a subwoofer simpler.

Roberts celebrates its 85th anniversary with a turntable

Along with a handful of new radios, Roberts is releasing an entry-level turntable, which will be only the second in the company's history.

The RT100 deck employs a semi-auomatic, belt-driven design and also comes with tonearm, cartridge and dust cover included. It will be available in August, priced £250.

The new radios include the Stream 94i and two from the Revival line, one big and one small. They're expected in September.

READ MORE: Roberts celebrates its 85th anniversary with a turntable

Three dumps data charges for Netflix and other streaming services

Save £20 on Amazon Prime membership for today only

Luzli Roller MK01 headphones roll up to fit in your pocket

Spendor's A4s are compact floorstanders that deliver both analysis and entertainment with ease.

They're articulate, expressive speakers, and both friendlier and more outgoing than the older versions. We can't think of anything negative to say about them.

And at this price, they're up there with PMC's Twenty 23s as our go-to speakers.

Read the full Spendor A4 review

Not every wireless speaker should look like a plastic toy, with Tibo's Vogue 3 opting for a wood finish.

It's a stylish looking effort and doesn't sound too bad either. It's not as adept as the class leaders, but its even balance and dynamic range make for a good show.

Overall, it's a fine effort that offers versatility, and compatibility with Amazon's Alexa, that others can't match.

Yamaha's latest AV receiver enters the market with a fair share of challengers. The question is whether it can hold its own.

The answer is not quite. While the RX-V583 is undoubtedly a powerful performer, happy to play from any source (including streaming), a lack of sonic subtlety lets the side down.

In that respect, it comes up short against its rivals. But if you're looking for pure power and punch, this is a good choice.