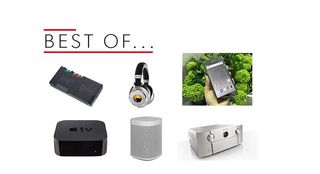 This week Marantz revealed another of its 2017 AV receivers in its flagship SR8012, Music Meters launched the OV-1B, a wireless, noise-cancelling headphone replete with its own built-in VU meter, and news filtered out this week that wi-fi networks have been compromised and many mobile devices open to being hacked.

For reviews, we have a number of products, including Sonos's Alexa-enabled One wireless speaker, Chord's Poly network streamer and Apple's 4K TV media streamer.

This 11-channel amp claims a power of 205W per channel, boasts support for Dolby Atmos (up to 7.1.4 configuration), DTS:X and Auro 3D surround as well 4K HDR formats including Hybrid Log Gamma and Dolby Vision.

The Marantz SR8012 is available in black and silver finishes, and goes on sale in December, priced £2700.

The headphones are also wireless, support aptX HD Bluetooth and noise-cancellation. You can control playback and volume via tap-to-activate buttons on the side of the earcups.

Battery life is a claimed eight hours and there's also a 3.5mm cable included. The OV-1Bs are available in November, priced £330.

A weakness in the protocol governing most wi-fi networks has left them vulnerable to hacking, it has been revealed.

Personal data can potentially be intercepted when travelling between your phone and wi-fi access point, and the weakness could also be used to insert malicious software into websites.

Android, Apple, Linux, Mac and Windows are all vulnerable to exploitation. Expect updates to arrive in the coming weeks.

When is Black Friday 2017? Where are the best UK deals?

The Poly is designed to work with the Mojo, turning the DAC into a music streamer.

The small size of the Poly makes it a portable solution and once connected, the sound produced is wonderfully articulate and rhythmic.

We have issues with the lack of a native app and the battery life is less than we'd expected. Aside from that, this is a cracking combination, making an already great DAC even more enjoyable.

The One is a Play:1 with Amazon's Alexa built-in and together, they make good partners.

It retains the stylish build of Sonos products, pumping out a sound that's solid and sophisticated, much like the Play:1. Alexa is well integrated but, for now, can only offer full control when playing music from Amazon's own music service.

Factor in some buggy beta software and the One isn't quite as smooth as we hoped. It still delivers a more than satisfactory experience.

Read the full Sonos One review

It comes with a huge library of 4K HDR content, performance is slick and both picture and sound are good, though fall short of a 4K Blu-ray.

There are some issues with the lack of streaming apps and advanced audio formats. It's a good attempt, but it just doesn't quite cover all the bases.