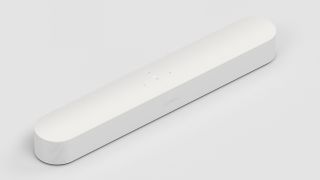 The newest of the trio, the Sonos Beam, is significantly smaller and cheaper than the other Sonos TV speakers, yet it offers the same array of streaming and multi-room features, plus the crucial upgrades of voice control and an HDMI connection. But that doesn't mean the Playbar soundbar or the Playbase soundbase are obsolete – far from it.

You might be wary of splashing the cash on a Sonos product, as the company recently hit the headlines over its plans to cease software updates for older products in May 2020. The good news is that those plans won't affect buyers of the the Beam, Playbar or Playbase.

The company is also suing Google for using technology developed by Sonos that allows smart speakers to wirelessly play music across different rooms. How will that affect you? Right now, it won't. But in the future, there's a (slim) chance Google may pull its Google Assistant voice controls from Sonos' products.

So which Sonos soundbar is best for you? Which offers the most bang for your buck, and what are the differences between them? Read on for our thorough comparison of the prices, features, specs, dimensions, sound quality and more.

The Beam is the smallest of Sonos’s TV speakers by quite some margin. Measuring 65cm wide, 10cm deep and 7cm tall, it's easy to find a spot for under or in front of your TV.

Weighing just 2.8kg, the Beam will be less of a stress on your wall if you decide to wall-mount too.

Not only is it smaller and lighter, the Beam also looks prettier than its bigger brothers.

Minimalist styling is once more the name of the game, but the little speaker’s elongated pill shape and mesh wrap combine to make something that looks just a little bit classier and more stylish.

The Playbar is arguably the least attractive of the three devices, with its angular design looking a little outdated compared to the rounded panels of its newer siblings.

It’s also in many ways an awkward design. At 90cm wide and weighing 5.4kg, it’s big and heavy. It’s about as wide as a 43in TV, and wall-mounters will need to be fairly sure about the strength of the wall and fixtures they use. The official Playbar wall mount (£39/$39) is cheaper than that of the Beam (£59/$59), while some buyers have found they need no bracket at all.

Not wall-mounting the Playbar makes its shape even more awkward. The device’s silicone feet are on what would be the back panel against a wall, and this orientation makes the Playbar less tall and therefore less likely to obstruct a TV behind it.

And even if it does block your telly’s IR receiver, a built-in repeater ensures commands from your remote get through. The problem is that in this orientation, the Playbar’s drivers are largely firing upwards, leading to a sound delivery that’s tall but lacking in directness.

To get the best sound from the Playbar, you need to stand it on its edge - which then runs the risk of obstructing your TV screen.

If you’ve got no intention of wall-mounting, the obvious course of action is to buy the Playbase. As the name suggests, this is a soundbase rather than a soundbar, which means it’s designed to support a television – some TVs with feet at either end will straddle it rather neatly.

That’s made possible by the Playbase’s height. Measuring just 5.8cm tall, it is much wider and deeper, giving the impression of a design that puts function before form. It’s solidly built, and the precisely machined holes that cover the device for maximum air control are pretty cool.

The three speakers are available in black or white and the Beam has, on its top panel, capacitive touch controls, just as the Playbase does. As the oldest of the bunch, the Playbar makes do with older-style, physical buttons.

The core features of Sonos products are there regardless of which of these Sonos soundbars you buy.

Support for practically every music streaming service under the sun, the ability to work with other Sonos speakers in a multi-room set-up, and the option to add two of the company’s music speakers (the Play:1, One, Play:3 or Play:5) as surrounds and/or the Sub for extra bass are all here.

The differences in the three products are mostly due to their varying ages. Despite being the cheapest of the three, the Beam is the most feature-packed. The key addition is voice control, with support for Amazon Alexa and Google Assistant, plus some Apple Siri commands using an iPhone or iPad.

Unlike the Playbar and Playbase, which rely on an optical connection to get sound from your TV, the Beam uses HDMI ARC (there is an optical adapter too).

The practical differences are minimal, but it does add an extra layer of cooperation between speaker and (HDMI CEC-compatible) telly, particularly with voice control.

Turning on your TV using Alexa is occasionally genuinely useful, and you can introduce deeper integration (playing particular shows via voice command) by adding a Fire TV device.

You can add Alexa to the Playbar or Playbase (or any Sonos speaker) by adding an Amazon Echo device such as the Echo Dot to your network, but this isn’t nearly as neat or as functional.

Both the Beam and the Playbase have AirPlay 2 support, bringing with it the ability to create multi-room systems with speakers from multiple brands. You can now have a Sonos Beam in the lounge, Apple HomePod in the kitchen and a Naim Mu-so Qb 2 in the bedroom, all playing the same music, thanks to AirPlay 2.

Unfortunately, the Playbar, as the oldest of the three devices (it’s over five years old now), won’t be getting AirPlay 2 support at any point. That could be a major consideration for some.

Sound format support is consistent across the three products, so you’re looking at Dolby Digital 5.1 as the best TV audio option available regardless of which you choose. You'll have to look elsewhere for a Dolby Atmos soundbar.

Meanwhile, no Sonos product supports hi-res audio and there’s no indication of that changing any time soon. If hi-res is essential, you need to buy something else.

The different shapes and sizes of these three speakers means there are stark differences in the quantity, type and arrangement of the drivers in each.

Unsurprisingly, given its relatively diminutive dimensions, the Beam has the fewest drivers, with one tweeter and four full-range, elliptical woofers working with three passive bass radiators.

The bigger Playbar has nine, individually amplified drivers: three tweeters and six midrange drivers. The Playbase has the same number of tweeters and mid-range drivers as the Playbar, but also has a separately amplified, innovatively S-shaped woofer for its bass frequencies.

Given those differences in the drivers, it’s impressive that a clear Sonos sonic signature runs through the range. It’s clear and balanced, with good rhythmic sense, plenty of punch and a natural midrange. There’s an authenticity to the presentation from Sonos products that many rivals struggle to match.

But while the core audio exhibits strong familial characteristics, there are undeniable differences between the presentations of these three Sonos TV speakers.

The Beam sounds exceptionally spacious and weighty for a device its size, stretching right across the front of a small- to medium-sized room and delivering bass with a depth and authority that’s entirely unexpected - as is the volume it’s capable of producing.

The Playbar is weightier, richer and more authoritative all round. It will go even louder and is capable of filling even the largest of rooms.

It’s little surprise that this is a bassier delivery than that of the Beam, but that it goes deeper than the Playbase is unexpected.

However, a slight artificiality to the Playbar’s bottom end suggests it’s having to work hard to compensate for its comparative lack of physical volume.

And while the Playbase doesn’t go as deep as you might expect, the integration, tonality and naturalness of its bass frequencies is impressive. There’s a cohesion through the tonal spectrum that the two soundbars can’t match.

But the Playbase, unlike its siblings, has an Achilles heel: bright, sibilant treble. The top end is really too aggressive, veering from sparkle to sharpness all too often and proving an irritation over time.

This is an issue that’s present, but far less prevalent, in the Beam and not an issue at all with the Playbar. As a result, while the Playbase is the most sonically capable of the three devices in some ways, it provides the least pleasurable listen in the long run.

The choice between the Playbar and Playbase will largely be based on your needs. If you have your TV on a wall mount, then the Playbar makes more sense of the two. If your TV is on a stand, put it on a Playbase instead.

The Playbase is the weak link in terms of sound, with the treble spoiling what is otherwise an impressive presentation. On the other hand, the Playbar is a physically cumbersome and rather awkward proposition, and its styling and feature set is starting to show its age. That it misses out on AirPlay 2 will be a deal-breaker for some.

On balance, the Sonos Beam is the pick of the range. In some ways it is obviously less sonically capable than its bigger, pricier siblings, but its performance given its size and price is really exceptional. What’s more, its compact dimensions make it far easier to find space for and its more advanced features, voice control in particular, make it extra compelling.

The Playbar should still be considered by those with very large rooms, and the Playbase remains the right choice in specific set-ups, but for most people and most rooms, the Beam is the best Sonos soundbar solution.

AGAINST: A bit of brightness at high volumes and with poor quality source material

VERDICT: The most feature-packed of Sonos’s TV speakers, and the best performance-per-pound proposition

VERDICT: It’s showing its age in terms of design and features, but the Playbar is still the best option for large rooms and those looking for extra bass

AGAINST: Quite prominent brightness and sibilance to treble

VERDICT: The soundbase design will suit some, but the Playbase’s irritating treble spoils an otherwise excellent presentation