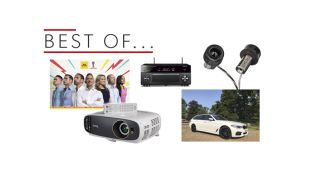 MORE: The new What Hi-Fi? Podcast is available now!

The BBC has gone into greater detail about its World Cup coverage, but sadly the "24/7 coverage" didn't feature 4K video, something we were all hoping to see following a series of 4K iPlayer tests.

For now, there will be 33 live games in HD across BBCs One, Two and Four, all of which will also be streamed online through the BBC Sport app and the iPlayer. Announced pundits include Jurgen Klinsmann, Didier Drogba and Alex Scott.

We're hoping an announcement of 4K HDR broadcasts could yet come further down the line, but the BBC is certainly leaving it late.

Digital radio has surpassed FM/AM listening for the first time, which will likely prompt a government review on the future of analogue radio.

The government announced it would consider a full switchover in the event of digital consumption rising over 50%, and 90% of the population being covered by digital signals.

A report in USA Today indicates that Google is set to relaunch its Play Music service as YouTube Music.

The music streaming service will launch in the US, Australia, New Zealand, Mexico and South Korea on May 22nd, with other markets following in the coming weeks.

Like Spotify's offering, there'll be a free, ad-supported tier, with an ad-free premium option that supports background listening and downloads.

Denon's recent form in the home cinema amplifer has been exemplary. And the X4400H is another excellent performer.

The feature set is a solid one, with Atmos, DTS:X and 4K HDR all covered, but the level of performance is the key talking point. It's fast and dynamic, and capable of great power and punch.

It slots comfortably into an excellent line-up of home cinema amplifiers, all of which deliver an exceptional performance.

BenQ's attempt to bring 4K down to a more affordable level works, for the most part. The chip inside is not 4K in the truest sense, but thanks to some clever technology, it can deliver a full 4K resolution.

And it succeeds in producing a crisp picture that emphasises a balanced colour range. A little more punch to the image would not go amiss, but it's a good projector for the price.

Flare Audio's Flares Pro perform an interesting trick. They can switch between wired and wireless connectivity. How so? There's a Bluetooth bolt-on module that allows you to switch from one to the other.

The performance showcases impressive clarity and precise timing along with some fine dynamics. They're not faultlesss - we sense coarseness in the treble and a lack of subtlety in the bass - but they're excellent, rugged headphones, that only just fall short of the full five stars.