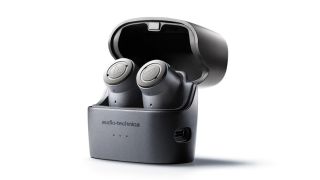 It’s natural: think true wireless earbuds, think AirPods. It’s likely that will be the case for some time. But that hasn’t stopped headphone manufacturers, such as Audio Technica, coming out with intrepid rivals.

The Japanese headphone giant has today introduced the premium, feature-packed ATH-ANC300TWs, which will surely be one of many truly wireless pairs launched at CES this week.

The aptX Bluetooth-supporting ATH-ANC300TWs utilise the company’s Quietpoint hybrid noise-cancelling tech, which sees each earbud’s two microphones (one behind the driver and one inside the duct tube) pick up unwanted environmental noise so that a digital processor can reduce it.

Three noise-cancellation modes – Airplane, On-the-go and Office/Study – offer some way of situation-specific customisation via the Audio Technica Connect app, while the increasingly popular hear-through function allows users to quickly hear their surrounding upon a tap of an earbud.

The app is also helpful for checking battery status, selecting preferred codecs and – usefully for clumsy folk – assisting in the location of the earbuds if they become separated or lost.

Naturally, and necessary if they are to usurp Sony’s class-leading WF-1000XM3, Audio Technica has put thought into the ATH-ANC300TWs’ sonic performance. The microphones have been placed on the sound conduit to ensure minimal disruption to the music signal, while 5.8mm diamond-like carbon coated drivers do the brunt of the work. For clearer voice calls, the ATH-ANC300TWs also leverage Qualcomm’s noise-reducing Clear Voice Capture technology.

Qualcomm steps in again to proffer its TrueWireless Stereo Plus tech for improved latency and power consumption. Instead of music being Bluetoothed to one earbud, which then passes it to another, this tech streams music directly to both earbuds simultaneously.

Battery life is satisfactory, with the supplied charging case able to boost the earbuds’s 4.5-hour battery life with an additional 13.5 hours per charge. Their IPX2-certified water resistance housing should make them resilient against sweat and water drops, too.