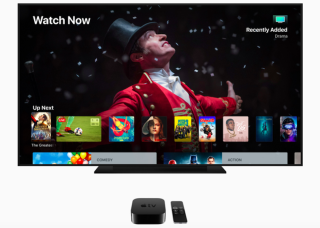 At its annual WWDC (Worldwide Developers Conference) this evening, Apple announced Dolby Atmos surround sound will be coming to its TV 4K streamer via a forthcoming tvOS 12 update, expected to be released to the public in September.

According to Apple, iTunes is - 'this fall' - set to become home to ‘the largest collection of Dolby Atmos-supported movies anywhere’, too - which essentially means it plans to have a richer collection of Atmos content than Sky or Netflix.

Last September, Apple announced 4K HDR films would be sold through iTunes for the first time, priced identically to HD films - and with already purchased HD movies upgradable to 4K for free. It's a stance film rental service Rakuten has since also adopted.

The same (rather generous) upgrade will apply to Dolby Atmos too: previously downloaded films now available with Atmos will get an upgrade at no additional cost.

The fact the Apple TV 4K will be the first (and only) video streamer compatible with both Dolby Vision and Dolby Atmos is a pretty impressive coup - especially as having its own Atmos and Vision content will make ithe most of it. After all, while the Amazon Fire TV 4K launched with Atmos support, it doesn’t as yet have access to Netflix’s content.

The tvOS 12 update will also bring what Apple is calling ‘zero sign-on’, which, more or less delivering what it says on the tin, means users won’t have to type in their passwords. The Apple TV will detect a user’s network and automatically sign them into the apps they have subscriptions for.

The Apple TV Remote will be added to Apple’s Control Center on iPhone and iPad to expand the user experience and integration. Apple also previewed new scenic aerial screensavers shot from space by NASA astronauts, for some, ahem, out of this world 4K HDR viewing.

The Moon is now available in 4K UHD

From AM to 4K: how the FIFA World Cup has been broadcast